1 Italian Supercar Makers are Struggling to Adapt to Electric Cars, Shocks No One

3 Ferrari Turns 75 This Year, Celebrates at Goodwood With Rare Models

4 Ferrari 488 Pista Gets an Instant Facelift, Crash Renders It Useless

Driven by Carroll Shelby and Juan Manuel Fangio, This Ferrari 410 S Is the Stuff of Dreams

One of the most prestigious racing cars from Ferrari’s long and illustrious history, the 410 S is a blue-chip collectible. Only four units were produced, all of them bodied by Carrozzeria Scaglietti. An evolution of the 375 Plus, the sports prototype was born from Enzo Ferrari’s ambition to secure the constructors’ title in the 1955 World Sportscar Championship.
14 photos

The Prancing Horse of Maranello unfortunately lost to Mercedes-Benz, whose 300 SLR proved a little bit more consistent over the course of six rounds. Ferrari lost the championship by two points, with Jaguar coming in third, Maserati in fourth, Aston Martin in fifth, and Porsche in sixth place.

It was a bitter end to the season, more so because Ferrari designed a brand-new chassis for the 410 S. Internally referred to as 519/C, the tubular spaceframe of the sports prototype features a long-block V12 developed by Aurelio Lampredi for the Superamerica. The largest engine built by the Prancing Horse up to that point, the 5.0-liter mill is rocking twin spark plugs, a quadruple distributor, coil ignition, and three Weber carburetors.

Capable of developing nearly 400 horsepower, which is 40 more ponies than the two customer cars produced by the Italian automaker, this lump was used in two factory-backed cars. Chassis 0598 CM is one of those racers, backed up by engine 0598 CM and tranny number 35/SNR.

To be auctioned by RM Sotheby’s at the Monterey Conference Center in August 2022, the second of two factory-backed racers was driven by the legendary Juan Manuel Fangio and similarly legendary Carroll Shelby.

The Texas chicken farmer told a Los Angeles Times reporter that “nothing can touch this Ferrari if it runs,” a tongue-in-cheek reference to the reliability issues that we associate with Italian cars. The original fuel tank further boasts an inscription from Shelby, which reads: “Mr. Ferrari told me that this was the best Ferrari he ever built.” Take that, 250 GTO fans!

Also driven by Phil Hill, Richie Ginther, Masten Gregory, Joakim Bonnier, Bruce Kessler, Jim Rathmann, and Chuck Daigh, chassis number 0598 CM is certainly going to sell for tens of millions of dollars. Unfortunately for the more curious among us, no pre-estimate is available at press time. 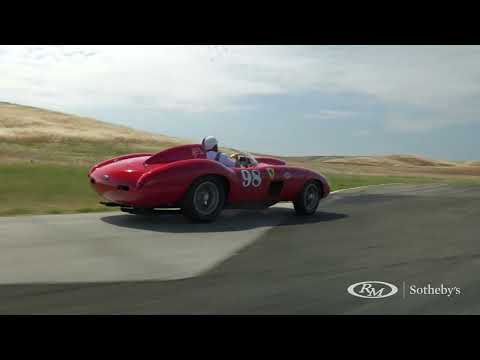