Turns Out Air Does Flow Nicely Around the Cybertruck, CFD Simulation Shows

BMW may have invented the four-door coupe SUV, but Mercedes-Benz eventually caught up and now makes a very capable rival to the Bavarians’ X4. It’s called the Mercedes-Benz GLC Coupe and just like its Bavarian rival, it is a more sporty and rakish looking version of a more traditional, family-oriented SUV.
100 photos

Launched in 2015, the GLC and GLC Coupe have proven remarkably popular, going some way to negate Mercedes' late entry into the segment. The GLC Coupe found a lot of fans, probably the same people who would have bought a BMW X4, but who preferred the Mercedes brand instead.

Now the GLC Coupe has gone in for its mid lifecycle refresh and it’s better than ever, offering the same hunchback SUV looks, but with improved details, new engines and new tech. And it also pulls the same trick of trying to make you think you’re in a sports car (on stilts) by making you feel more cocooned inside and also giving it harder suspension.

Just like before the facelift, this really does pay dividends and the GLC Coupe feels different enough from behind the wheel. You really do notice its firmer suspension compared to the regular GLC (which I happened to drive just a few days before I got to drive the GLC Coupe). The Coupe definitely feels firmer - you notice this in corners where it seems to exhibit less lean, but also over bumpers where it’s not as cushy as you’d expect a Mercedes to be.

Throw the GLC Coupe into a corner, but don’t jolt the steering, and it will provide reassuring grip and quite low body roll. It’s worth mentioning that my tester rode on regular steel springs and didn’t come with adaptive dampers.

However, if you push harder into a corner, or try to destabilize it the by quick steering inputs (hoping to make the rear end slide out), you will be rewarded with understeer. This has something to do with the less sophisticated 4Matic that Mercedes uses on its smaller engines - this system doesn’t vary power between the two axles; it’s a constant 50/50 split and this somewhat detracts from the rear-wheel drive car feeling I thought it would give me.

The steering, though, is really impressive for an SUV. It’s precise, well-weighted even in Comfort mode and it does occasionally send you hints about what the front tires are doing.

At least the car has an excellent 360-degree surround view camera system that has some of the best and most crisp graphics in the business. It’s not as advanced as what BMW does these days (it renders your car in 3D and then places it in a scene modeled on what’s around you), but this more simple approach by Mercedes really can’t be faulted.

One thing that can be faulted, though, are the parking sensors. They do their job of informing you that obstacles are around your car, but it has to be the most paranoid system of its kind. It screams at you and turns red even though some obstacles are as much as half a meter away - it’s really quite annoying and unless you really need the sensors, you can just navigate using the cameras (and your eyes).

The interior of the facelifted GLC Coupe is nearly identical to that of the pre-facelift model. Mercedes hasn’t changed much, but it has given the GLC Coupe a fully-digital gauge cluster, as well as its new MBUX infotainment system that’s displayed on a new larger screen and is controlled via a new touchpad control method - it’s considerably better than before and if you don’t like the big touchpad on the center tunnel, you can also navigate through it using the smaller touchpads on the all-new steering wheel.

Space in the front is very good, and you do feel the sloping roofline from the driver’s seat. It doesn’t bother you when you’re in the driver’s seat, but if you step into the back and are taller than 180 centimeters, you might not be as comfortable as in the normal GLC. The GLC Coupe also gives up 50 liters of load volume compared to the normal GLC, but it still has 500 liters, so it remains decently practical.

Nothing to complain about when it comes to the 300d powertrain fitted to my tester. The new 2-liter diesel with 245 horsepower and 500 Nm (368 pound-feet) of torque hurls the GLC Coupe from standstill to 100 km/h (62 mph) in 6.6 seconds (one-tenth slower than the regular GLC). The Coupe is also slightly thirstier than the standard GLC, with a claimed efficiency rating of 6 l/100km on the combined cycle (the standard GLC is rated at 5.9 l/100km).

During my test drive, I achieved 8.8 l/100km, mostly driving it in the city with no real regard to economical driving. Besides, the 300d engine is so strong, you will be forgiven for wanting to feel its surge as often as possible - it really pushes you hard into the back of your seat, like only a 3-liter six-cylinder engine would have been able to just a few years ago - it’s an impressive power plant with lots of poke.

Overall, the GLC Coupe 300d 4Matic is a niche proposition. Its look is certainly more polarizing than that of the standard GLC, but with the recent facelift, it’s definitely better looking than before (well, both models are). The Coupe really packs more visual punch than the regular GLC, with its unique and striking roofline, as well as the wider rear haunches that accommodate a staggered wheel setup (my tester had 235-section tires up front and larger 255-section tires in the rear). 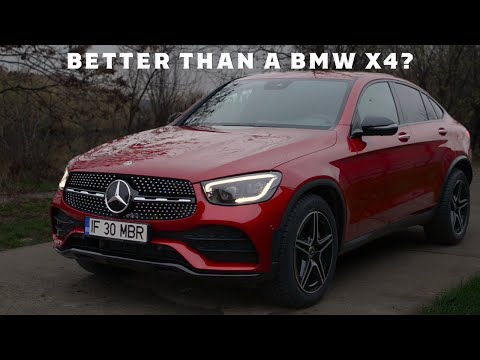 This look won’t be for everybody, for some buyers, who are more extroverted and may want to stand out more through their car purchase, the GLC Coupe will be a no brainer choice between the two. The Coupe also feels sportier to drive than the standard GLC, although be aware that it’s not the most comfortable high riding vehicle in its class - it may even be more firmly sprung than the rival BMW X4.