This SEAT Electric Scooter Will Hit the Road in 2020

Mercedes radically altered its BMW X3 rival when it evolved from the GLK to the GLC. Gone was the squared off mini-G-Class aesthetic, replaced by what could only be described as a C-Class wagon on stilts.
110 photos

And while the GLK had proven popular, the GLC that replaced it was a much better fit for its market context. So much so, that it became Mercedes’ best selling SUV with its blend of exterior and interior style, excellent comfort levels and plenty of pokey engines to choose from.

Now the time has come for the GLC to receive its mid lifecycle refresh and the revised vehicle is even better. The GLC never really put a foot wrong in the segment - it’s as if Mercedes knew what its potential buyers were thinking to the letter and that’s exactly what it delivered.

The GLC’s main traits have always been its smooth, understated styling, special feeling interior and a driving experience that majors on refinement yet is not devoid of sportiness. Its range of engines has always been broad and relevant and all these characteristics have been carried over and improved upon for the facelift.

The exterior is now a bit more aggressive, thanks to a revised front fascia that sports redesigned headlights, grille and bumper, and the choices of rims also help it look more sporty. The rear end only gets refreshed full-LED light clusters, although they are not reshaped - they just feature a new design within the same outline.

One part of the exterior design that has also been retained and slightly altered, are the fake exhaust tips on the bottom of the rear bumper. Why does Merceds put two proud, chrome-finished fake tips there when the car only has a measly single exhaust? I will keep moaning about this until it goes away, which I hope it will, because I’m by no means the only journalist who has a problem with this.

The interior is pretty much identical to the pre-facelift model. You will spot the new (optional) fully-digital gauge cluster, the new infotainment screen that comes with MBUX (and its new touchpad control method), as well as the new steering wheel that’s shared with all other Mercedes models, from A- to S-Class.

You can clearly see this is just a refreshed version of an older Mercedes, because the automaker instead of having its new seamless twin-screen setup for the gauge cluster and infotainment chose a different approach. The digital gauge cluster sits where the traditional gauges would have been, complete with the cowl above - this makes the GLC’s interior look not as modern as that in some newer models like the A-Class or the GLE SUV.

As before, you can certainly find a good driving position, regardless of your body type and for drivers looking for a sporty feeling SUV, they can rejoice because the seating position is pleasantly low (for an SUV). And space for rear passengers is ample too - the person sitting in the middle seat will have to straddle the transmission tunnel, but other than that it’s roomy enough to carry adults on long journeys.

The GLC’s trunk is not massive, but at 550 liters it’s decently big - it’s worth noting, though, that some of that load volume is actually under the trunk’s false floor; in case you were wondering why it doesn’t look like a 550 liter trunk, this is the reason. Load volume can be upped to 1,600 liters with the rear seats folded, a configuration in which you could probably transport big pieces of furniture with relative ease.

Out on the road, the GLC 300 d on its standard suspension feels planted and surefooted. This is in contrast with a pre-facelift GLC that I drove which felt quite floaty if you didn’t put it in sport mode, so much so that I started feeling sick from the motion while I was driving that car on a winding road.

No such issues with this tester, though. It felt much more connected to the road and while it’s not as sporty as a comparable BMW X3, it’s not far off either. But, then again, the X3 isn’t necessarily that much less comfortable - the current incarnations of these models are very well matched in this respect.

Off the line, it feels properly rapid, revving past 5,000 rpm without running out of puff. It’s helped by the excellent (standard) nine-speed automatic gearbox that is probably the best of its kind in the business. It can not only swap cogs with imperceivable smoothness in comfort mode, but it can also satisfyingly slam through the gears in Sport+ mode - it is a real feat of engineering and it pairs excellently with the diesel in my tester.

Mercedes says this GLC 300 d 4Matic should return around 5.9 l/100km, but during my drive (which included mixed urban and highway driving), I achieved 8.3 l/100km. I did not drive the vehicle in an economical manner, though, so for my style of driving, this figure is actually pretty good.

The GLC is Mercedes’ best selling SUV and after a few days with my GLC 300 d 4Matic AMG Line tester, it really isn’t hard to see why. It’s stylish, it doesn’t look obnoxious and out of place in the city, its driving experience is a great blend of comfort and sportiness and you feel quite special when you’re aboard.

It’s not the sportiest SUV in the segment, or the cheapest, but it’s close to the top of the class and Mercedes will have to pull out all the stops when the time comes to replace it in order to produce a better, more accomplished model than this.

My only gripes with the GLC 300 d have to be the so-so feeling brakes that aren’t especially confidence-inspiring, especially since the vehicle also dives under braking quite noticeably, and the fact that between its electronic nannies and the constant 50/50 split all-wheel drive system, the car is more prone to understeer, just like a front-wheel drive car - I would have liked it to feel more rear-wheel drive at the limit.

I haven’t driven any of the proper AMG models in the lineup, and I’m sure those feel better when being driven quickly, as my tester’s spec is definitely geared more towards a buyer who prefers relaxed cruising and effortless overtaking all while keeping the fuel bills low. It’s a good compromise, but it may not satisfy a keen driver. 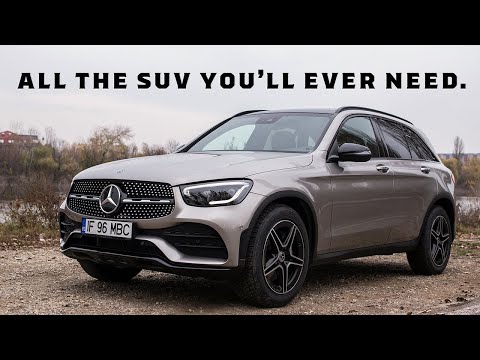 If you want a better idea of what this GLC 300 d was like, check out my video review. I talk about how the car feels on the road, how it looks and whether or not the facelift has made the GLC better than it was before; spoiler alert, it has.