Home > News > Videogames
4 Aug 2022, 18:22 UTC ·
by Cosmin Vasile
Drift Type C is the latest project from indie developer Jonworks Interactive, a real driving game that promises a complete driving experience. As per the studio’s statement, the game focuses on “hyper realistic car specs,” which is quite unusual for an indie project.
9 photos

Each car’s specs are detailed from power to weight, to differential setup, to factory tire compound and alignment settings. Although the game features a wide range of racing-themed activities, it’s up to each and every player to choose their own adventure.

At launch, Drift Type C features off-roading, multi-stage rally races, driving on trays, flagging, delivering tofu, DIY Space Gymkhana, texting while driving, and the ability to drive a bus. Some of these activities might sound like memes, but as long as they avoid the cringe factor, it’s absolutely fine.

What’s interesting about Drift Type C is that the game offers a huge sandbox map featuring a hybrid-procedurally generated world that curates over 100 miles (160 km) of road. Also, the game has a bit of a story too. Drift Type C takes players across 9 biomes as they compete against 13 warriors and 13 ghosts to free the so-called God of Time.

With the help of the Hypervesicle, an item that slows down your race timer every time you pull off a successful drift, you’re supposed to finish 2-minute races in just two seconds.

“In truth, drifting isn’t usually the fastest way to drive, but it is the coolest. Other racing games try to get around this by making drifting faster, but that totally goes against the supposedly realistic physics that they pride themselves on. Drift Type C doesn’t change physics to be more realistic, but time itself! Our unique Hypervesicle mechanic lets players pull off super slick drifts while setting a superior score on the race timer. We’ve also included loads of fine turns that really encourage players to master the art of drifting!” explains game director, programmer, and writer Jonathan C. Haman. 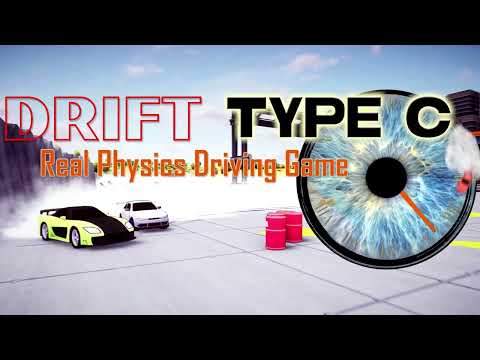