Cleetus McFarland is an infamous but ever-rising YouTube personality, and it’s quite clear why he’s capable of attracting a wide-ranging audience. After all, here’s a video of him, friends, and family enjoying a day off at the Freedom Factory with Chevy monster trucks, an Intex pool, Ram vs. Ford tug of wars, Florida swamp airboats, drifting, a helicopter... and Vaughn Gittin Jr.
38 photos

These past days, he worked hard and hit the cool Summit Midwest Drags event, where he endured four days on the road, three drag strips, and just a trailer hooked up to his newly finished twin-turbo Chevy El Camino (a.k.a. the “Mullet”). So, it’s only natural for Cleetus McFarland (the impossibly charismatic Garrett Mitchell) to party harder.

As such, in his latest video, we catch him (vlogging at the wheel is a big no-no in our opinion) on the way to his recently acquired Freedom Factory (the former DeSoto Speedway racetrack complex) to enjoy a proper day off after all the “professional” commotion.

Because it’s the first time the gang enjoys a pool party after just purchasing a “luxurious” Intex assembly, they need to celebrate in their own highly entertaining style. So, from the very first moments, we’re getting a taste of things to come as we see Cleetus pulling a Chevy Silverado-based monster truck and using its bed as a makeshift springboard.

But wait, there’s more because none other than drift star Vaughn Gittin Jr. is also present as the guest star that will deliver the drift/burnout seal of approval. And he’s going all out for this encounter, as discussed early on when he mentions that it would be neat to drift inside the pool, not just around it.

No worries, because he somehow fulfills that dream and you can jump at the 11:55 mark if you really want to know what we mean by that. Don’t skip if you have the time to watch all the craziness unfold, though, because there’s so much stuff going on, we had to organize everything via time stamps so we can keep track.

As such, from the 4:48 mark, we can witness a cool twin drift showcase between Cleetus's Corvette and a Florida swamp airboat (with a cool POV, of course). Next up, from the 5:24 minute, we see Vaughn join the fun with his Fox Body Mustang and the ‘Vette/Ford duo execute the ballet-like stunts. A little bird’s eye view from the helicopter from the 6:30 mark, and we’re on for more twin donuts around the pool.

Then it’s time to take everything up a level or two (7:45), as the guys try a quad drift involving the Corvette, Fox Body Mustang, and a couple of airboats. That’s not all, because from the 10:05 mark, there’s also a not so little tug of war between a red Ford and a green Ram truck, complete with a little race. Finally, from the 11:40 mark, we get to see how the Chevy monster truck became the perfect makeshift trampoline. 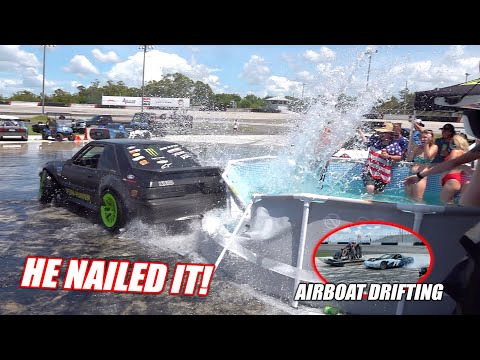