1 Ken Block and the Escort MK2 Make a Good Mix

4 Insane Stunts, Ken Block and James May Race Ricky Carmichael
Up Next 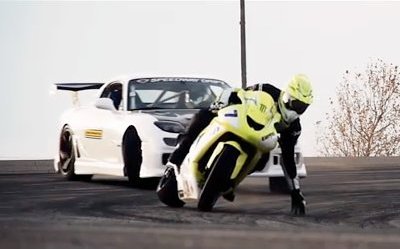 One of the most insane stunt videos we’ve seen since that car-motorcycle-plane trio footage made by Top Gear in 2009 has just been uploaded on YouTube by Icon Motorsports. The video shows a modified 175hp sportbike battling against a 375hp sportscar in massive speed drift stunts.

While the stretched 2005 Kawasaki ZX-10R is ridden by Nick "Apex" Brocha, the Corvette powered Mazda RX7 has Jim Guthrie behind its wheel.

Drifting, now a sport in its own right, is very popular today as it has managed to capture the imagination of a large part of those who own a car. Now Brocha comes to prove that you can also drift a motorcycle.

At the beginning of the video, he says “We're trying to find out what it’s gonna take to get myself runover by an absurdly obnoxious RX7.”

If you are not familiar with the names of these two skilled pilots, then let us get you acquainted with them. Brocha is a Street Freestyle competitor and show rider operating as a professional since 2005.  Active in the national points series "XDL" he traverses the nation showcasing the limits of his motorcycles.

You can also find him entertaining spectators at a host of top US motorcycle venues such as the International Motorcycle Shows, MotoGP events, and the Supercross finals.

On the other hand, Guthrie is a former driver in the Indy Racing League and later on he fielded a car in the Firestone Indy Lights Series for his son Swan. Jim and Sean were suspended indefinitely for conduct detrimental to the sport in 2009.

We’ll now leave you drift away into the comfort of your privacy to watch the video below: