1 Barbie’s DreamCamper Is Now a Very Real RV, Thanks to West Coast Customs

2 World’s Most Famous Hispano Suiza, the 1924 H6C Tulipwood Torpedo, Could Sell for $12M

5 Custom ‘77 Rolls-Royce Camargue Known as the Sbarro Unikat Could Be Yours, a Steal
Car video reviews:
Up Next

Try to think of a cherry-red car, and the image of a Ferrari will probably pop up. But another iconic red car, albeit neither as powerful nor as aerodynamic, is also The Phone Car. Let’s take a trip down memory lane.

Dream Big: The Iconic Phone Car Is a ‘75 VW Beetle Rebodied as an Old-School Desk Phone

Before we all had smartphones and this thing called the Internet, and before we were able to keep in touch with friends (and even strangers) at all times, non-stop, people connected in different ways. We kept in touch via snail mail or the telephone, which was not mobile and did not have Internet. This isn’t a story about how everything was better back in the day, but it is a piece packed with nostalgia, so it goes to all of you who might be feeling a tad nostalgic today.

One man from Massachusetts, Howard Davis, is a passionate phone collector. He’s been gathering items since he was eight years old, and his collection now includes over 4,000 pieces, from telephone-related pieces of jewelry, to a variety of desk phones, ranging by today’s standards from ancient to vintage. His most prized item, though, is The Phone Car, whose name really says it all.

The Phone Car is a car shaped like an old-fashioned late-‘60s desk telephone – the one with the buttons, not the one with the rotary dial. It’s a tribute to a long-gone era, so the focus is not so much on it being an outstanding automobile, but on aesthetics. Just in case you were wondering why someone would want to build a car with such an unusual shape.
The Phone Car is not a new creation. It was completed in 1983, after more than a year and a half of hard work: one year for the body, and another 6+ months for the wiring and the finishing touches. The chassis is a 1975 Volkswagen Beetle that Davis bought for $125, and had stripped of everything but the frame, the engine, the transmission and the wheels. Despite what some accounts online say, Davis didn’t build the vehicle himself, Dave Huntress did, at his Boston shop. Davis commissioned it for a trade show and as promotion for his telecoms company.

The body of The Phone Car is made from aluminum sheets welded together and made to look like molded plastic. It’s painted cherry red, because it was the most popular color for desk phones back then, and also because it’s the most likely to get attention.

As far as performance goes, there’s little to speak of. Presumably, no modifications were made to the Beetle’s engine, and that oversize body adds plenty of weight. On the official website, Davis says that The Phone Car “should” go as fast as a regular car, and that he once even drove it at 50 mph (80.5 kph), which is hardly what we understand by “regular” car speed today, but still impressive for something as blocky and heavy as this thing.

Davis considers The Phone Car “a finished piece of rolling art,” one which also happens to be fully functional and road-legal. Visibility is terrible through the tempered glass because of all the buttons on it, but it has turning lights and mirrors, and a license plate that reads “PHONES.” Until some years ago, it also had two fans instead of AC, one for each passenger, and a most rudimentary dash. The Phone Car doesn’t have a horn, but it rings just like its smaller, older counterpart when you need it to.

Perhaps the most interesting part of the story is that The Phone Car is still around. In January 2011, it took considerable damage when the roof of the warehouse it was stored at fell on it, under the weight of wet snow, but it was restored to perfection in the following months. In 2012, it got new, shinier buttons, and in 2014, it received some touch-ups to the exterior. In 2018, it went on its third cross-country trip, stopping at a variety of events, including desert raves and music festivals. Just last year, The Phone Car was in Massachusetts for the 4th of July parade, though it encountered some technical issues that required towing.

The Phone Car may be old – and definitely old-fashioned – but it is still kicking and getting people to smile. Asked in an older interview why he’d have such a kooky car fabricated, Davis’ reply went something like this: back in the ‘60s, people used to drive the most fabulous cars, but these days, everything is so “very plain and very mundane.” Well, The Phone Car is the opposite of plain and mundane. 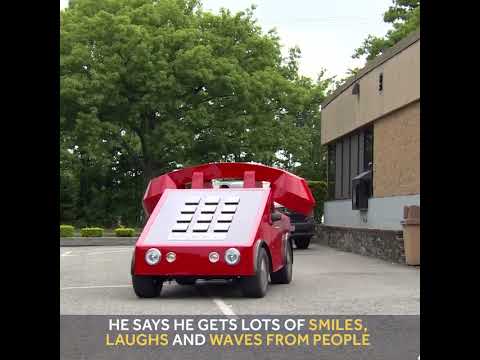