3 Radical Long-Range Cargo Drone Takes to the Sky, Can Recharge Its Batteries in Flight

4 The U.S. Military to Start Testing a Disposable Cargo Drone for High-Risk Operations

5 Airbus Challenge Entry A100 MND Is a Drone That Could Compete Against Amazon
Car video reviews:
Up Next

While SAF (Sustainable Aviation Fuel) is seen as the best solution for cutting aviation-related CO2 emissions in the near future, some believe that ditching conventional aircraft engines and replacing them with electric motors is the ultimate goal. Advancements in technology made the dream of an e-plane much closer to reality than it was a decade ago. The dragonfly-shaped Alia proves it.

Dragonfly-Like Alia Is the Electric Aircraft Gearing up to Make History in the U.S.

On March 9, 2022, U.S. Air Force (USAF) pilots Hank "Hog" Griffiths and Maj. Jonathan Appleby flew an all-electric aircraft that could write history. It was a milestone for the collaboration between USAF and the Vermont-based Beta Technologies, which developed the aircraft. In 2021, Beta had obtained airworthiness certification for Alia, which would be flown by USAF pilots for the first time one year later.

USAF wasn’t the only major player supporting Beta’s ambitious plan of developing a game-changing electric airplane. The company had also signed a contract with the U.S. Army and had secured an order of ten eVTOLs (electric vertical take-off and landing) from UPS, with an option for 150 additional units. More recently, the helicopter charter operator Blade has also ordered five Alia aircraft.

After the Series B funding round was closed this month, Beta’s total funding is now close to $800 million, with Amazon being one of the investors. All of these accomplishments seem to indicate that the Alia eVTOL is on track to launching operations by 2024. That would be incredibly fast, considering that the company itself is only five-years-old.

The inspiration for this project came from the medical field. Martine Rothblatt, the founder of the pharmaceutical company United Therapeutics that “makes” human organs, wanted an aircraft that would be able to deliver them fast, over medium distances, with no emissions.

And she wanted it done soon, despite everyone pointing out the obstacles. She eventually met an engineer who was bold enough. According to the New York Times, Kyle Clark sent her a watercolor sketch of the future e-plane and the rest is history.

After an initial prototype that was put together in just eight months, Clark went back to the drawing board and created an improved version. The Alia-250 is inspired by the Arctic tern, the only bird that reaches almost every continent, flying over all the oceans on its migration journey. Similarly, Alia is also meant to fly as far as possible - a great challenge for battery-powered aircraft.

With a design that makes it look like a giant dragonfly and a 50-foot (15 meters) wingspan, Alia could carry 1,400 lbs (635 kg) of cargo, or five passengers plus the pilot. It can fly for 250 nautical miles (287 miles, 463 km) at a top speed of 173 mph (278 kph). Alia would need less than an hour to recharge, and could sustain a two-hour flight on three battery packs, with five being the maximum number of batteries that it can hold.

What makes this eVTOL stand out is also the fact that its manufacturer has developed a versatile charging system for both on-airport and off-airport operations. Beta’s chargers can be used for aircraft and electric ground vehicles as well, claiming to be easy to integrate within any type of existing transportation infrastructure.

The company has even designed a network of charging systems, with more than 60 sites already in progress, at airports across the U.S., from Vermont to Arkansas. But its ambitions for the future go further than that. Beta envisions e-planes landing on top of charging stations that are not only solar-powered but also made out of shipping containers – a concept that would blend zero-emissions operations with sustainability.

Beta Technologies hopes to obtain the FAA (Federal Aviation Administration) certification for its battery-electric cargo aircraft in the next two years.

Able to conduct longer flights, at a higher speed than other eVTOLs, without needing a dedicated runway, the Alia-250 could deliver essential supplies for the medical field and the military, fast and with zero emissions. The future of aviation could be electric, after all. 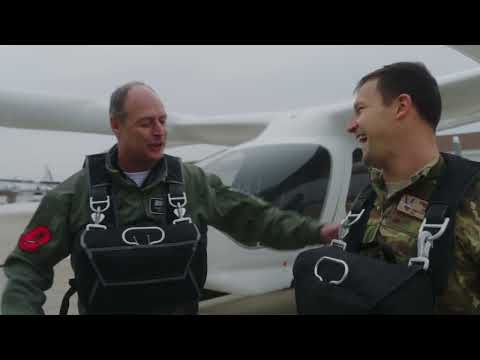