5 No Surprise: GTA 6 Won’t Be Offered for Free on Gaming Subscription Services
Car video reviews:
Up Next

Rockstar’s latest update for GTA Online includes a new car model that expands the lineup available following the Los Santos Tuners DLC, and this time, players are getting their hands on a coupe.
157 photos

It’s the Emperor Vectre, a model based on the Lexus RC F and also featuring some design cues borrowed from the Toyota 86, at least as far as the rear side is concerned.

In theory, the Vectre is a sports car, so it should be a solid choice for those who want to win races in GTA Online. But in practice, it looks like this new model is more about the looks and less about the performance, both in stock configuration and when fully upgraded.

A series of drag races conducted recently and published on YouTube channel GTA family has the Vectre trying to beat the Itali GTO, the Pariah, and the Calico GTF.

And while we hate to spoil the fun of watching the video, the Vectre is the slowest in almost every single test, once again proving that whoever buys it should just be interested in its looks.

The results of these drag races aren’t necessarily surprising when it comes to the performance of the other cars. The Calico GTF and the Itali GTO are both insanely fast, especially when fully upgraded, so at some level, it’s even unfair to throw the new Vectre into a battle against them.

But at the end of the day, parking the coupe in your virtual garage is still worth the money if you want to drive a head-turner on the streets of Los Santos.

The car can be yours from Legendary Motorsport for $1,785,000, which means it’s only a bit more affordable than the Calico GTF (which can be purchased from Southern San Andreas Super Autos for $1,995,000 in the Los Santos Tuners update). 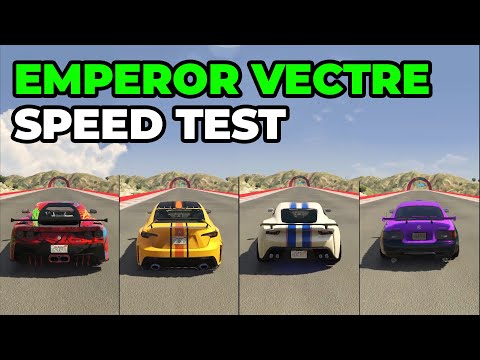