We’ve seen some rather interesting drag races lately, culminating with the one where a stock BMW M5 keeps up with a Ferrari FF. That video alone blew our minds but the one we’re bringing you today brings the confusion to a whole new level. Or is it?
1 photo
Here we have two extremely powerful cars going at it, from two completely different leagues. On the one hand we have a 996 Porsche 911 GT2 tuned by 9ff while on the other, a BMW M6 Gran Coupe, bone stock. Could the 2-ton monster keep up?

We know that BMW makes some of the best engines and transmissions in the world. There’s no denying that but even so, the laws of physics cannot be ignored. That being said, something must be at bay here since the result of the race is rather peculiar.The Porsche
In its stock configuration, the 996 Porsche 911 GT2 has a twin-turbocharged 3.6-liter engine making 462 HP and 640 Nm (470 lb-ft) of torque, absolutely stunning numbers. At the same time it’s rear wheel drive, has a 6-speed manual gearbox and weighs 1,430 kg (3,153 lbs).

However, this is not a stock model. It was tuned by 9ff and has new turbochargers, new camshafts, a reinforced clutch and a bigger exhaust to take the power output up to 608 HP. Truly, a beast.The BMW
If the Porsche is a thoroughbred sports car, the Bimmer is in a completely different class. The M6 Gran Coupe has a powerful engine and a blazing fast transmission but it’s a 4-door coupe that should carry 4 people at the same time, in complete silence, comfort and luxury.

Under the bonnet hides a 560 HP 4.4-liter twin-turbo V8 that’s also sending 680 Nm (501 lb-ft) of torque to the rear wheels along with all those horses. The gearbox responsible for the transmission is a 7-speed DCT unit. And that’s where the difference was made.

The BMW has less power and more weight to carry around. At the same time, the transmission works flawlessly and you can really see it work its magic, especially in higher gears. Furthermore, there’s the human error to keep in mind as well, as the Porsche comes with a manual and no matter how hard you try you’ll never be able to change gear as fast as an automatic one. 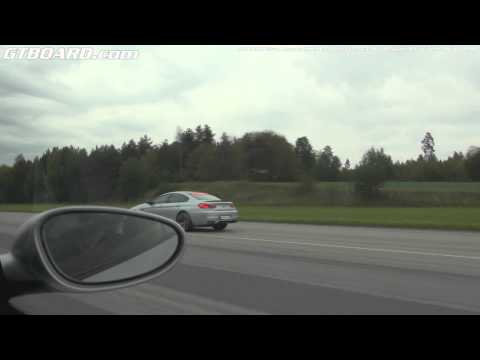