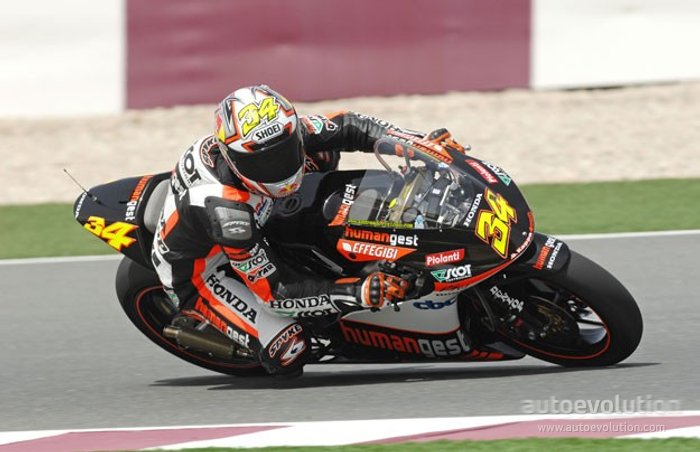 Andrea Dovizioso put an end to the Jorge Lorenzo & Aprilia domination of the 250cc class and clinched maybe the most spectacular win of the 2007 season. Team Scot's rider went on to finish a perfect weekend at Istanbul, since the former 125cc champion won from pole and clinched 2nd place in Overall Standings.

The race started off great for the 21-year old Italian, who managed a perfect start and grabbed the lead from the very first corner. As Jorge Lorenzo was stranded in the following pack, Dovizioso extended his lead to almost one seconds after only one lap. At the same time, his teammate Yuki Takahashi came into the pits to retire and it seemed that Team Scot's mechanical problems might jeopardize the Italian's chances for the win.

Only 2 laps later, Dovizioso was caught up by Alvaro Bautista and the two managed to get away from the pack, as they exchanged the lead for several times. But Jorge Lorenzo's class showed once again, as the Aprilia rider closed the gap on the leading duo only 10 laps later. From that point on, the Turkish fans were to enjoy every second of the race. Lorenzo quickly stormed into the lead, while Dovizioso looked very strong in second. Bautista was very close to them in 3rd.

Midway through the race, Dovizioso had plenty of opportunities to overtake the defending champion and step into 1st place. Still, he chose to wait and only proceeded to taking the lead in Lap 15. He used his low-end speed (clearly superior to Lorenzo's Aprilia) to grab 1st place with only 5 laps to go and started to put a few tens of a second between him and the Spaniard. Still, he wasn't about to get away with it that easily as Lorenzo fought back in the laps to come.

Only 3 laps to go into the race, Lorenzo overtook Dovizioso but the Italian recovered at the exit of the corner and re-gained 1st place. The Aprilia rider didn't give up and passed Dovizioso one more time, this time allowing Bautista to climb all the way into 2nd too. Team Scot's rider was now into 3rd and had to really pull a rabbit out of the hat for the win.

The Italian regained his 2nd place to Bautista and started trailing Lorenzo for the win. And it all came down to the last lap. Dovizioso made a little mistake when approaching a corner and it seemed like Lorenzo would eventually win it. Still, the Italian pushed harder on the final triple-S section and recovered the lost time, while also wonderfully overtaking the Aprilia rider. Bautista also managed to get in front of Lorenzo, but the latter recovered in the final corner and got in front of his countryman for 2nd place. Dovizioso crossed the finish line in 1st place and managed to bring Honda its first win of the season. More importantly, though, with Alex De Angelis in 4th place, the former 125cc champion climbed into 2nd place in Overall Standings.

“It's really good, really important. Wow. Today the race was so fast, but with good fighting and some touching. To get the win is unbelievable. The championship starts here for us”, said an enthusiastic Dovizioso after the race.

Thomas Luthi of Emmi Aprilia managed to finish the race in 5th place (best result in 250cc), as he was followed by former 125cc rival Mika Kallio (KTM) in 6th. Hector Barbera, the rider who managed a wonderful run in the Spanish GP (before crashing out of the race), only came 8th at Istanbul, almost 50 seconds behind the leader. Marco Simoncelli crossed the finish line on an outstanding 9th place, considering his early crash in the race (Lap 7).

Jorge Lorenzo is now leading the championship on 70 points, followed by Dovizioso on 52 and Alex De Angelis on 46. Next race of the season will be held in China, on the 6th on May.