Home > News > U-turn
Aurel Niculescu
Although McLaren only created 58 P1 GTRs, and they were all solely intended for exclusive track use, here we have Doug DeMuro reviewing chassis number one and even driving it on the street. Mind you, he didn’t break any laws, because this unit has been converted by Lanzante to street-legal use. Which, by the way, doesn’t mean it took away any of its brutal performance or added some comfort creatures.
19 photos

Valued at around $3 million, according to DeMuro’s appraisal (because the listing from the dealership he borrowed the converted track weapon doesn’t have a price attached to it) this is a treat even for the renowned vlogger. One that makes him feel “like the world is ending” when accelerating it even for a bit, but let’s not get ahead of ourselves.

Even though we’re dealing with “the most insane thing I can imagine,” it all starts pretty natural with the presentation of the P1 GTR and how Doug came to borrow it for this (insane) review. The example is for sale, of course, but that doesn’t really matter in the grand scheme of things as much as all the little quirks and details DeMuro explains during little more than half an hour.

Before heading over to the video, let's make sure everyone wrapped their minds around this. We’re dealing with chassis number 001 of the McLaren P1 GTR track-only series, which was somewhere along the way converted by Lanzante (the third unit they worked upon) to legal street use for about $700k.

Or, as DeMuro puts it, this racecar has been turned into something that “you could drive frequently if you are absolutely insane.” Where do we sign up for the looney bin?! Jokes aside, Doug does have the usual rundown, starting with the “quirks and features” from the 3:14 mark.

By the way, before moving to the interior section of the review, be sure to check out the soundtrack of the cannon-like exposed tips of the exhaust from the 5:25 mark, along with the proper way to enter this hypercar from the 8:12-minute mark.

While inside, DeMuro shows us he’s already in love with the paddle shifter (he confesses his feelings during the drive part that kicks off at the 24-minute mark), but we’re more attracted to the barren infotainment screen. It has just one app: Climate; it does come with A/C, so there’s one creature comfort right there. 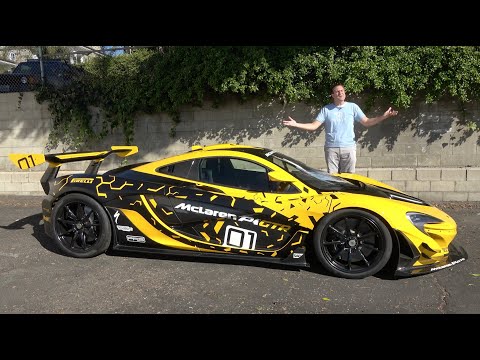