4 Here’s the Quickest Volkswagen Ever, the Mental Breakdown Dragster

Mercedes-Benz Is Entering the Market for Premium Business Apartments

Doug DeMuro Takes His Hummer H1 to the Drag Strip Because Why Not?

You know, when people do similar things on the internet, they're called trolls and they get tons of verbal abuse from every direction. But when Doug DeMuro takes his Hummer H1 to the drag strip, we all sit and watch.
1 photo
Don't get me wrong, I'm not trying to call Doug a troll. The difference is that while it's very easy to sit behind your keyboard and talk crap at somebody, it takes real guts to show up at a racing venue in a completely stock Hummer H1.

I'm sure somewhere in this world (probably in the USA, though), there's a very competent Hummer H1 that was specifically modified for drag racing. I'd imagine it can pull 11s quarter miles and make a fool out of aerodynamics with its brute force. But that Hummer H1 doesn't belong to Doug DeMuro.

His Hummer is as stock as they get, and it's also yellow. That aspect has absolutely no relevance to this story, but I just thought I should throw that in. It has the 5.7-liter Vortec V8 engine that runs on petrol and only coughs out 190 horsepower. It also has a four-speed automatic transmission that you can bet was not geared for quick acceleration.

And we haven't factored the car's weight in yet. According to Doug, that's about 7,000 lbs, which would be a lot even if the engine did double that power. Since it only does 190 hp, that flat drag strip looks like a very steep mountain to climb for the H1.

And you can bet the mountains would make the Hummer feel much more at home. Here, it's surrounded by Hellcats and semi-trucks that run the quarter mile in 14 seconds.

We won't spoil it and tell you how the H1 fared, but rest assured it's pretty terrible. However, Doug did two runs and there were signs of progress so, who knows, maybe the H1 hasn't shown us everything it's capable of. 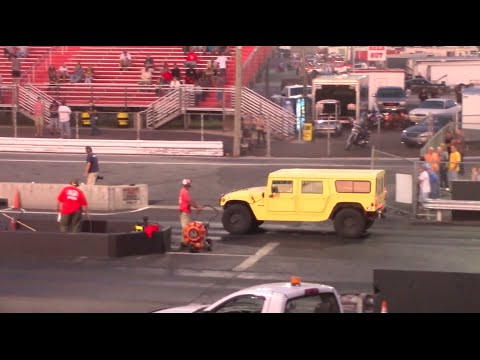