4 Mercedes-AMG G 63 Gets a Steroid Shot, Has More Power Than the Lamborghini Aventador SVJ

5 Matt Farah Says the Mercedes AMG GT Black Series Is a McLaren With the Motor Up Front
Car video reviews:
Up Next

Home > News > Car Profile
30 Dec 2021, 19:32 UTC ·
by Stephen Rivers
There's no doubt that Mercedes cut costs on the W220 S-Class but is it really as bad as people tell you? Doug DeMuro breaks down every detail to get to the bottom of it. Interestingly enough, Mercedes seems to have really spent the money on technology, and some of it is truly groundbreaking.
9 photos

Take one look at the W220, and from that moment forward, there's no question that it's not as impactful as any previous S-Class. It's simply not as bold when it comes to styling. Of course, that theme continues in a lot of different facets of the W220.

Inside, the buttons and switchgear are so cheap-looking that they could've come off of a forklift, and you wouldn't know the difference. At the same time, what some of those buttons do is quite shockingly cool. Doug points out the adaptive cruise control first.

Keep in mind this is 20 years ago, and the S-Class had it. It also has forward collision warning, ventilated seats, and LED taillights. Sure, these things might be standard on lots of cars these days, but back then, it continued the tradition of the S-Class offering what nobody else had.

This thing even had massaging seats, rear zone climate control, and a mobile car phone. The parking sensors still work and are brilliantly located. The rear seats are luxurious, comfortable, and featureful.

Not only does it the vehicle have multiple adjustments for the back seats, but they're also heated and ventilated. Even now, there are very few cars with ventilated seats in the back. So is this really the worst S-Class ever? Kind of.

Not only does have a lot of cheap parts everywhere, but it doesn't drive all that well. Despite this particular example having a V12 under the hood, it only makes 360-horsepower. Even when Mercedes dropped a turbo version into the S-Class a couple of years later it, made less than 500.

So yes, there's tons of great technology in the W220. The problem is keeping all of that technology working 20 years later. No matter how cool some of that stuff is, it doesn't overcome the big drawbacks everywhere else. 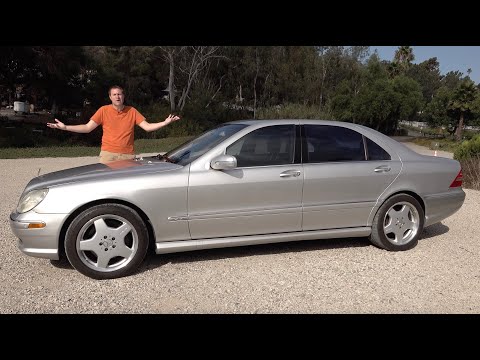