2 Doug DeMuro Can't Drive the 2022 Range Rover, yet He Finds It Unique

4 Doug DeMuro Reviews 2022 Nissan Pathfinder, Is Impressed but Would Still Rather Have a Kia

Home > News > Car Profile
2 Dec 2021, 18:43 UTC ·
by Stephen Rivers
The pickup truck war is only getting hotter, and the new Toyota Tundra TRD Pro is the latest entry to try and steal market share. Doug DeMuro takes us on a full tour and says that it might be good enough to properly rival the Ford Raptor.
6 photos

As the pinnacle of its trim line, the TRD Pro should be a great truck in every respect. Thankfully, that's the case in almost every aspect of its design. The new twin-turbo V6 powerplant is perhaps the oddest decision, but getting 20 mpg combined is clearly the motivating force.

Doug also loves the way the Tundra TRD Pro feels inside. "All of the buttons and switches are tough," he says as he points out little fake screw heads built into the control dials. This thing even comes with a factory-equipped LED light bar integrated into the front grille.

It also comes with CRAWL Control, which is an advanced off-road cruise control system. DeMuro says he's actually used it and praises its abilities. "It is really, really excellent at getting the truck unstuck," he says. He also praises the addition of Multi-Terrain Select, which is the off-road traction control system in the Tundra.

Then there's the comparison to the Ford Raptor. The Tundra has 437-horsepower, which is less than the Raptor (450-horsepower) but not by much. Here's the thing though, it has more torque than the Raptor. Doug even says that it sounds great.

It's also set to be priced at roughly $10,000-$15,000 less than a Raptor. Considering all of its off-road capability and interior comfort, it's hard to justify the more expensive option. At the same time, the TRD Pro isn't perfect.

Doug's main complaint is that it doesn't push the game ahead far enough. So many features are just OK for today. There are very few serious innovations. The question is, would that be enough for you to spend more on the Ford or Dodge? 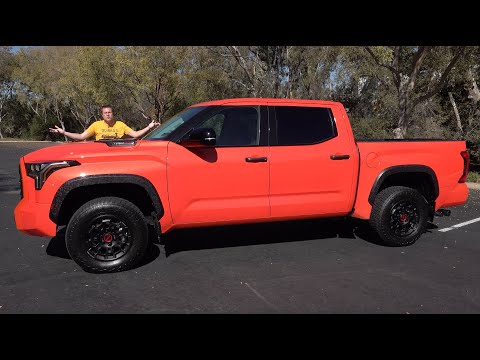