2 Is a 2023 Acura Integra Tourer Enough to Make You Consider Buying a Sporty Wagon?

Twinned with the China-exclusive Honda Integra, which is a four-door sedan, the Acura Integra for the U.S. market is a five-door liftback. Despite the increased door count, don't forget the DC2 was a liftback.
25 photos

One of the first people to review the Integra is Doug DeMuro, albeit the drive test will have to wait a little bit because we’re dealing with a pre-production car. The big question is, did Acura design a better Honda Civic Si?

In a nutshell, yes. Doug tested the Honda a while back, describing it as disappointing in some respects. The biggest niggle is the existence of the Canada-spec model, which comes with more stuff for less money. For starters, the U.S. model doesn’t get fog lights up front, LED turn signals in the side mirrors, shift lights, and parking sensors fore and aft. Secondly, America misses out on heated front seats, a heated steering wheel, dual-zone automatic climate control, HomeLink, and wireless phone charging.

It's pretty obvious why Honda left so many items out, and Doug points the finger at them for this very reason. Don't, however, think for a moment that the Integra is perfect. A continuously variable transmission that DeMuro refers to as an automatic way too often is standard, while the six-speed manual from the new Civic Si is a no-cost option in the A-Spec Technology Package. This configuration is estimated to cost in the ballpark of $35,000, while the CVT-equipped base trim level is closer to the $30,000 mark.

In other words, Acura decided to put the stick shift on a pedestal in order to squeeze out more dollars from prospective customers. On the other hand, we’re dealing with a longer and roomier car than the Civic Si. The only downside to roominess is the sloping roofline, which eats into rear occupant headroom. Seated out back, Doug can’t help but touch the headliner.

A rival for the Audi A3 Sedan, Mercedes-Benz CLA Coupe, and BMW 2 Series Gran Coupe, the new Integra replaces the Acura ILX.

On that note, don’t you get the feeling the Integra is that middle-aged dude that’s trying to relive his college days even though he’s bald and weighs at least 50 pounds more than in the good ol’ days? The Honda Crosstour resemblance is uncanny as well. Unpopular opinion here, but Acura just pulled a Blazer here in the sense that Chevy’s current Blazer is disappointing compared to the K5 that duked it out with the Bronco. 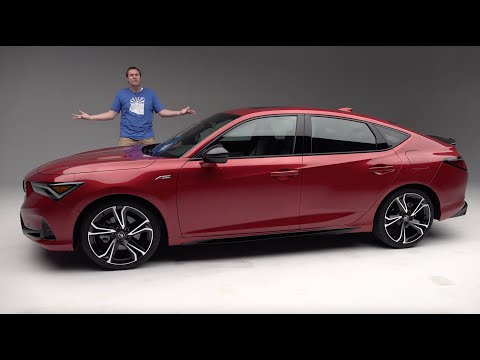