1 Hot Toyota GR Corolla Gets an Even Hotter Special Edition

On One Hand, the Porsche 718 Cayman GT4 RS Can Be Civilized, on the Other Hand Is Lotion

Toyota made an even more aggressive version of its GR Corolla hot-hatch and made it ready for those who want to take it to the track regularly. It didn't tick all the boxes, though.
8 photos

Toyota is a formidable rally contender. There, it runs with the Yaris WRC. Based on that model, it built the GR Yaris, which is unavailable in the U.S. Yet, Toyota came up with a new idea: to transfer all the technology from that little hot-hatch into the compact-sized Corolla hatchback.

But that wasn't all. Besides the Core and the Circuit edition, it introduced the Morizo edition. The name sounds Italian, but it comes from the CEO of Toyota Motorsport Division racing nickname, as Doug DeMuro pointed out. Apparently, he wasn't satisfied with how the regular GR Corolla handled and asked for something more aggressive.

The car's exterior is available either in Pearl White or Mate Gray. A new set of 18" 10-spoke forged alloy wheels wrapped in Michelin Pilot Sport Cup 2 tires fitted as standard. Also, at the front, the bulge on the hood features two vents to help cool the three-cylinder, turbocharged engine. At the back, the triple-exhaust system offers an interesting view under the wider rear bumper fitted with a more aggressive diffuser. Doug DeMuro doesn't know, and the officials didn't tell him if the absence of the rear wiper is a thing for the Morizo Edition or if the pre-production car was assembled in a hurry. The same goes with the roof spoiler, which will look different.

The most noticeable part mentioned by Doug DeMuro is that the car is missing the rear seats. Instead of the split-folding bench, there is a brace and a chassis reinforcement that stiffens the car making it more suitable for a race track. Judging by that brace's shape, it is good to keep safe a set of tires from moving around the cabin while going or turning back from a race.

Since there are no rear seats, Doug mentioned that there are no buttons for the windows in the back. Toyota engineers thought about removing the controls for the rear windows from the driver's door panel as well. Strangely, though, there are grab handles above the back doors. Unlike the regular GR Corolla, the Morizo Edition features an Alcantara-wrapped interior with red stitching. Moreover, the steering wheel features a 12'o-clock red mark.

Also, as Doug pointed out, the sports seats at the front feature high bolstering and pass-through gaps in the tall seatbacks for four-point harnesses.

Moving on to the engine compartment, Doug DeMuro talks about the upgraded engine that offers 22 lb-ft (30 Nm) of torque more than the standard GR Corolla, reaching a total of 292 lb-ft (400 Nm) of twisting force. Yet, the engine's power remained the same at 300 horses (304 PS).

Despite being built with a stiffer suspension setup than the Circuit version, the Morizo Edition doesn't feature a front strut bar, which is unusual for a track-oriented car. Last but not least, this 200-units limited edition will be more expensive than the regular GR Corolla. 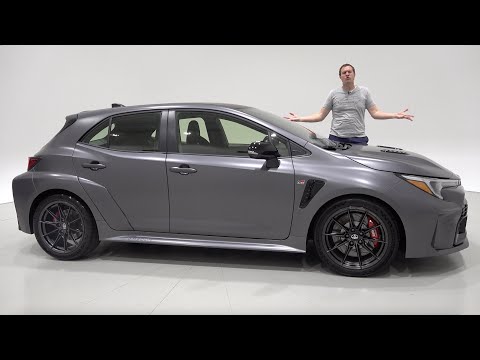