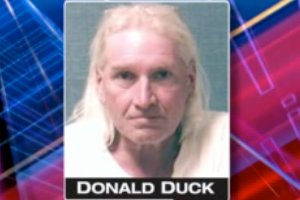 If you think the famous cartoon character has taken up drinking, then you might have the same issues as the man that shares the name with Disney’s white anthropomorphic duck. We are talking here about 51-year-old Donald Norman Duck, who was caught by the Massillon Police Department drunk while driving his car (or should we say flapping his wings?) through the city.

In fact, as reported by Fox 8 News, Mr. Duck allegedly bumped his car into another vehicle at a pizza shop drive-thru on Lincoln Way East. As he was waiting second in line to order, he repeatedly ran into the van in front of him. Well, this might have ruffled the van driver’s feathers, don’t you think?

Local authorities that arrived at the scene found Duck with red eyes and smelling of alcohol. They even found a bag of marijuana in his car. So, if our drunk Duck isn’t that feathered as the cartoon character, then he smokes pot to fly...

This, however, is not Donald Duck’s first encounter with the police, as was previously charged with DUI four times so far. Hopefully, this will be the last time this happens.

"He's a frequent flyer," Captain Joe Herrick of the Massillon Police Department was quoted as saying by the aforementioned source. "He's got multiple previous DUI's, multiple previous no operator's license and operating under suspension, so he's not that good a driver."

Well, we can’t wait to hear of a certain Mickey Mouse involved in a high-speed chase that blames his impaired driving on some cheesy disorder.