2 Tuned Mercedes G-Class Gets Stuck in the Snow in Russia, Video Is Painful to Watch

4 RWD, AWD, and FWD Face Off in the Snow to Find Which Is Best, Place Your Bets

5 Things You Need To Do Before and After You Get Stuck in Your Car During a Snowstorm
Car video reviews:
Coverstory

Don't Trust This Snow Vs All-Season Tire Comparison, But Follow Its Advice

People who drive in the snow regularly know all too well what a big difference having snow-rated tires (proper ones, but more on that later) can make to the way a vehicle behaves in winter conditions. It's actually those who only come across the white stuff occasionally that tend to ignore the advantages and settle for an all-season tire.
8 photos

From a financial point of view, it makes perfect sense. Why invest in two sets of tires when you're only going to feel the benefits of one for a few days a year? And it's not like tires - particularly good ones - come cheap. Well, if you can't afford it, that's alright, just stick to the bare minimum and compensate by being extra careful. But if you can stretch the budget, then opting for what is clearly the safer choice makes a lot of sense. Not looking to get overly dramatic here, but those tires could be what stands between a horrible crash and just a big scare.

When it comes to winter-specific tires, there are two main misconceptions. One is that they only serve a purpose when driving on snow, an idea that isn't just wrong but also dangerous. When the temperatures drop significantly (think anything below 44 Fahrenheit or seven Celsius), the compound in summer tires loses elasticity and becomes considerably more rigid. That, as you may guess, reduces the levels of grip, so the same rubber that handled great on a circuit last summer will have you skidding in the winter if you push it too hard, even over dry asphalt.

The other misconception is that you will be perfectly alright with any type of tire as long as you're driving an all-wheel-drive vehicle. This one is even more dangerous because it blatantly ignores two aspects: one, four wheels without traction are just as useless as two without it, and two, all-wheel-drive does absolutely nothing to help a vehicle's braking distance, which is what should worry a driver the most during winter driving.

If anything, an AWD vehicle will always be heavier than its 2WD counterpart, and if it doesn't have one, then it means it's likely a big and heavy SUV or truck in the first place. And weight, together with the grip offered by the tires and the braking system itself, is what dictates how further down the road you skid (if at all) during an emergency brake.

The test in the clip below tries to tackle this second misconception by lining up an AWD Volkswagen Golf R (Mark VI) and an all-electric single-motor (and hence 2WD) MINI Cooper SE. The former has a set of Michelin Pilot Sport 4 all-season tires – one of the best options on the market – whereas the latter wears four Michelin Crossclimate 2s. The thing is, while the AWD car benefits from arguably the most competent all-season tire option, the 2WD car – which was supposed to have dedicated winter tires – only gets snow-rated tires that are clearly (the proof is in the name) still some sort of all-season tires.

Well, be that as it may, after losing the acceleration test by a small margin, the MINI still outperforms the Golf in the one area that truly matters: braking distance. The EV needed about 77' and 7" (23.6 meters) to stop from 28 mph (45 km/h), whereas the Golf took 92' and 1" (28 meters). The testing procedure may have been skewed from the start, but the fact the result favored the so-called snow-tire even under these circumstances only goes to emphasize how vital this piece of kit can be. 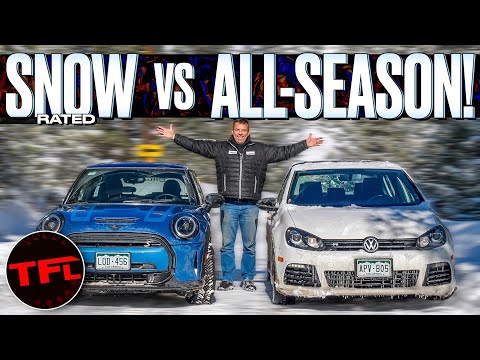