1 Tyson Fury Is Vacationing in Cannes, Onboard the $18,000-a-Night iRama Yacht

4 Record-Breaking 11,500-HP Gentry Eagle Being Demolished at Scrapyard Is a Sad Sight

5 Luxury Yachts, Assets of 15 Sanctioned Oligarchs Found, and Not One Moment Too Soon
Car video reviews:
Up Next

A relatively famous charter yacht from Dominator Yachts, Naseem, has sunk off the coast of Italy, after it caught fire. First-responders were unsuccessful in putting out the blaze, which spread to the entire vessel.
10 photos

Naseem was delivered in 2009 by Dominator and had been used mostly for charter in recent years, being described as “the perfect vessel for [an] Italian adventure.” Formerly known as Carocla III, it featured an exterior design by prestigious Nuvolari Lenard, with an interior by Team for Design – Enrico Gobbi and naval architecture by Dominator Ilumen AG.

The yacht offered accommodation for eight guests and four crew, and amenities like a variety of water toys, deep jacuzzi, a flybridge for panoramic views, outdoor dining area and a formal dining salon, and a beach club with a swim platform.

Naseem is now at the bottom of the Adriatic Sea, after being consumed by a fire and sinking. The news is confirmed by Vigili del fuoco and local coast guard, through the video available below. A fire broke out on board on May 12, while the ship was 5 miles (8 km) out off Santa Maria di Leuca, in Puglia, Italy.

First-responders did their best to put out the fire, but it soon spread to the entire ship. Hours later, whatever was left of Naseem went under. The Maritime Authority is now conducting an investigation into the incident, which will also reveal the cause of the fire. All people on board the ship were rescued and carried to safety by the coast guard.

The owner of Naseem is not known, and neither is the price of the build, nor the value of the damages, in this particular case. That said, a Dominator yacht of this size can sell for as much as $5 million on the used market. 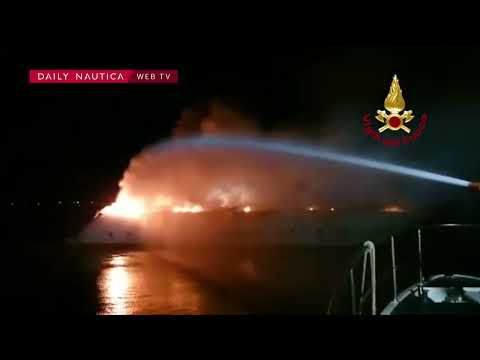