5 This Dog Drives a BMW and You Don't
Space Junk

It happened in the Turkish region of Sakarya, not far East from the country's largest and best-known city, Istanbul. The footage shows a pack of dogs going past the white car in a pretty alarmed state, but all of a sudden, their attention turns toward the Toyota.

In the few minutes that the attack lasted, the dogs managed to rip the sedan's front bumper clean off, taking one of its headlights out as well in the process. The damage is estimated at around $1,600, but unless the owner of the car had it insured, he's going to either sue the municipality for allowing the dogs to roam free, or pay out of his own pocket.

The good news is that car belongs to a man named Cem Acar who just happens to be a mechanic, so at least he'll be able to cut the expenses on labor hours. When he saw the car, he called the police thinking it was an attempted theft, but the real perpetrators were soon discovered upon viewing the video from a nearby camera.

The question everybody would like to know the answer to now is "why?" We're no canine experts, but we do have furry friends and can also use our deduction and logic, so our conclusion is that the dogs were after a small animal - either a cat or a rat - that was hiding inside the engine bay.

There are a few clues that would suggest this explanation. First of all, the temperatures at night in Sakarya can go as low as 6 degrees Celsius (that's below 43 Fahrenheit), so a cat hiding near the warm engine would make sense. Second, you can see the dogs are actively looking for something.

They are focused on one particular area of the car, ignoring the equally juicy rear bumper, for example. Finally, at some point, there is one dog that inserts its head into the engine compartment through the hole left by the removal of the headlight. That clearly indicates it was looking for something, and since people don't make a habit out of storing ham or salami under the hood of the car, the only real answer is the presence of either a cat or a rodent.

However, there are "experts" who would very much disagree with our assertion. Turkish website Hurriyet Daily News quotes the Chair of the Chamber of Veterinary in Sakarya, Mustafa Yildiz, who thinks that the dogs acted out of revenge. That's right, revenge. And it gets better. He thinks that dogs can tell a Corolla from other makes and models, claiming that "a similar car might have crashed into one of their friends and they might have acted with the motivation of revenge." He also went as far as saying that the dogs might have psychological issues.

Mr. Yildiz, thank you for the good laugh, but we're afraid the only one with psychological issues here is a man holding a position that should really enable him to make more sensible comments. He does say in the end that the dogs might have just smelled some meat, but why not start with that? Did he feel he needed to offer a more complex explanation first?

Have a look at the clip yourself and try to see if you can spot that flicker of revenge in the dogs' eyes. 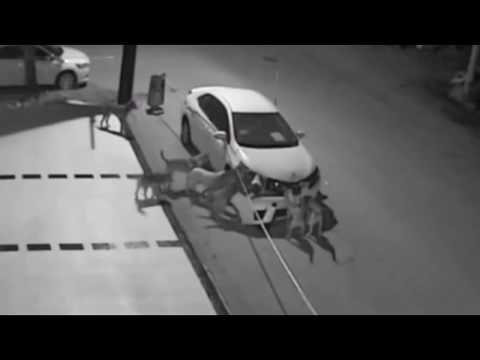