Introduced in April 2020, the N DCT may come as boring compared to the standard manual transmission. Be that as it may, N models equipped with the dual-clutch gearbox have a trick up their sleeves: N Grin Shift mode.
12 photos

At the press of a button, this mode is designed to maximize performance for up to 20 seconds at a time. Think of it as overboost. In the case of the Kona N, which comes exclusively with the N DCT and front-wheel drive, there is a pretty noticeable difference between normal, sport, and NGS modes.

The Fast Lane’s Roman Mica recorded 7.50 and 7.13 seconds in the car’s normal mode at roughly a mile about sea level. Switching to sport mode improves the acceleration from zero to 60 miles per hour (97 kilometers per hour) to 7.10 and 7.08 seconds, respectively. Not quite in the sixes yet…

Hitting the magic button improves peak horsepower by 10 ponies, from 276 to 286 horsepower. Peak torque stays put at 289 pound-feet (392 Nm), which is more than adequate for a subcompact crossover utility vehicle.

In the real world, on a regular stretch of road, N Grin Shift helped the Kona N hit 60 mph in 6.61 first time out and 6.64 seconds on the second run.

Roughly half a second quicker than the vehicle’s regular mode is quite a boost, especially if you remember that Roman tested the Kona N at a mile above sea level. Generally speaking, a naturally-aspirated engine loses power the higher the elevation due to lower air density. Turbocharged engines aren’t as sensitive, but nevertheless, altitude does have an effect on performance.

Priced at $34,200 excluding destination charge, the Kona N is nicely equipped right off the bat. Other than official accessories that you can do without, options include three no-cost paint finishes: the pictured Lunar White, the stealthy Ultra Black, and the look-at-me Racing Red. In terms of highlights, the list begins with an eLSD up front, joined by 14.2-inch front brake rotors, 19-inch wheels, Pirelli rubber, and electronically-controlled suspension. 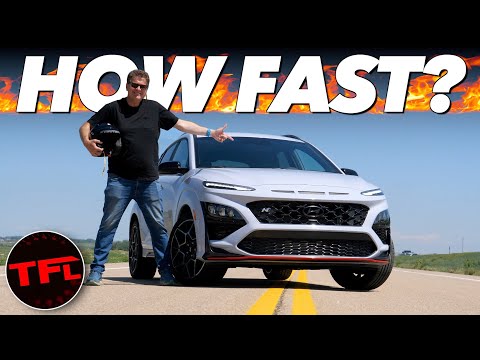