4 Winter Survival 101: How To Properly Winterize Your Car for a Trouble-Free Commute

Does Anyone Fancy a Japanese Car "On the Rocks"?

Home > News > U-turn
Cristian Agatie
Japanese car imports are highly popular in Russia, with Vladivostok on the Pacific coast being a true JDM heaven. One of the latest car shipments went sideways though, as the ship reached Vladivostok with dozens of Hondas and Toyotas on deck covered in a thick layer of ice.
7 photos

Videos shared online show the ice-clad carrier ship in the port of Vladivostok while unloading its cargo. Instead of cars, the crane started hoisting more like car-shaped ice cubes from the deck of the Sun Rio Roll-on-Roll-off carrier. People who witnessed the event said the ice was 6-inch thick on some cars. The weather was particularly harsh in Vladivostok this time, and at -2F (-19C) there was no point in waiting for the ice to melt. Instead, the cars had to be removed from the ice crust using crowbars and other unconventional tools.

Some cars were more affected than others, as the waves broke the windows and the cars' interiors filled up with water before freezing. We’re not sure whether these cars are still worth anything, but being Russia we assume they might not be scrapped. Salty seawater and metal don’t make a very good combination, but we’re sure the cars will look pristine when they’ll reach the market, if only for a while.

This is by no means an isolated event, as humid sea winds coupled with sub-zero air temperatures often result in ship icing. It is a dangerous phenomenon too, as the icy build-up makes the ship top-heavy, which increases the risk of capsizing, reports Marine Insight.

Sun Rio is one of the smaller cars carriers with a gross tonnage of 7,578 tons. It was built in Japan in 1911 by Yamanishi Shipbuilding & Iron Works. Unlike other more specialized car carriers, this one does not carry all its cargo below deck. As such, some cars are completely exposed to the elements during the crossing. 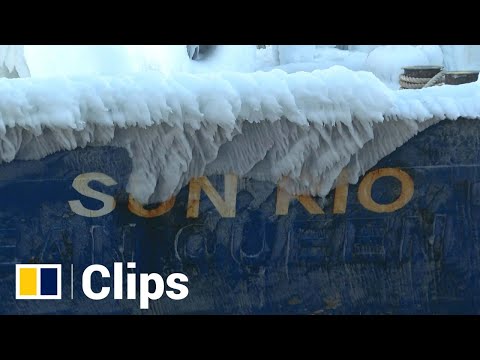