1 Clash of Generations: Father and Son Drag Each Other In Opposite Dodge Magnums

2 Become a Safer Pedestrian Today, Avoid Becoming a Number in a Statistic

3 UReady Trike Will Have You Running Like Forrest Gump

4 Wearing Headphones While Jogging Can Get You Killed

Red Bull has set up an unconventional race at a rallycross track in Sweden. The company that became famous around the world for selling energy drinks decided to get several athletes involved in a relay race that involves a car, a track, and a runner. This is a man-versus-machine situation, and it sounds fun.
6 photos

Kevin and Timmy Hansen from the World Rallycross championship will be competing in vehicles, while a team of four athletes will be racing on foot against them.

The team of runners includes free skier Max Palm, triathlete and ironman Patrik Nilsson, mountain biker Martin Soderstrom, and racing driver Mikaela Åhlin-Kottulinsky. With the introduction out of the way, this is not a drag race.

To keep things fair and safe, the track has been divided into a portion for the car, and one for the runner. Otherwise, a runner would have been at risk if they had to share the track with a racing car, not to mention the clouds of dust that get raised with each pass.

For the sake of proportion, a lap of running will equal two laps in the car. Each lap that is run involves 400 meters (almost a quarter mile), while driving a lap means going 800 meters (almost half a mile), just to keep things fair. It is like bracket racing, if you will.

Moreover, the runners will pass a relay stick from one to another after one lap, while the car will switch drivers after four laps. The winning team is the one that will be the first to have the checkered flag waved in front of them, so this event is against the clock, not just a matter of competitors versus athletes.

Red Bull has decided to prepare this race as a promotional tool for its annual Wings for Life World Run, which involves people running to raise money to fund research on spinal cord injury.

The latter is yet to be a curable disease, and researchers hope to change that. Unfortunately, it is unclear how much money would be required to solve the issue, so do not think about asking Elon for help.

For EUR 8 (ca. $8.44), you too can use an app made by Red Bull to have a virtual catcher car chase you on your run. All the money raised from entry fees goes to spinal cord research, Red Bull notes. 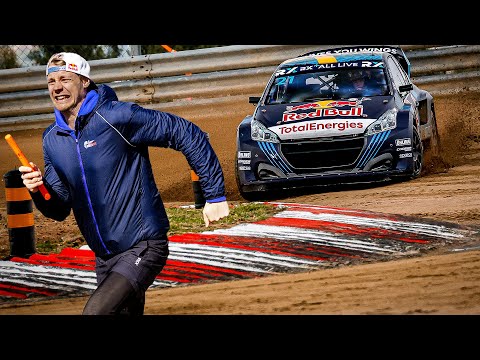