1 XPro One Is a Rugged RV That Sleeps Three, Provides 10 Days of Off-Grid Living

4 Z-Triton 2.0 Is the Trike-Boat-Camper That Wants to Be World’s Most Sustainable RV

I recently ran across an RV manufacturer from here in the United States that seems to be stirring up quite the hubbub with their willing and able teardrop campers, Oregon Trailer. With habitats like the DoDrop Alpha, it's really no wonder.

The teardrop camper before you has been dubbed the DoDrop Alpha by its creators. Yes, there is a more simple DoDrop, but Alpha is the one that displays the peak abilities that Oregon Trailer deems necessary for an off-road capable travel trailer.

Suppose you've heard of this manufacturer before. In that case, it simply means that you're keeping up with the news as we've recently discovered the crew ourselves and displayed another one of their creations, the FronTear, a camper that raises the feel of vintage building techniques and materials to modern living standards.

As for the DoDrop Alpha, you can tell right from the start that it's built to handle a little more than just asphalt. It might be that roof rack or those AT tires that give this impression. Then again, it could be the Timbren axle-less suspension or just the general stance of this bugger. Whatever the reasons, let's take a look.

Now, the manufacturer's website doesn't state much about how this camper is built, so I've had to do a bit of digging to find out what goes into one of these. Since each Alpha is entirely customizable, how much you'll pay for one and what it will be able to do depends on nothing more than your needs and wants.

Overall, Oregon Trailer builds its habitats from wood, and Alpha is no exception to that rule. But one thing this crew does is coat the exterior with bed liner. Not only is this a rather affordable alternative to an exterior coat, but it also works well in protecting the wooden body from the elements and damage sustained while off-roading. This is even something you can do if you already own a camper trailer. That body is then set up on a reinforced chassis with the Timbren suspension system I mentioned.

One thing to note about the Alpha is that it features no exterior galley setup. All you'll be given is the option to mount some lateral tables that also act as window guards. This is the point where I started to ask myself some questions.

Well, what Oregon Trailer has done is create an interior that allows you to move things around. The two mattresses that yield a sleeping space for a couple of people can be stacked on one side of the camper, revealing an extensive storage area inside. Yes, you'll be storing your cooktop, cooler, and any other utensils you need for camping inside the Alpha.

Since I'm on the subject of the interior, simplicity seems to be one of the goals for just about any Oregon Trailer camper, and so nothing more than a shelf or two, some LED lighting, and the mattresses I mentioned is all you're going to find. But again, because you can customize each trailer to your liking, do speak up, but be sure to bring your checkbook too.

Optionally, you can also add rear and roof cargo racks that allow you to move some of your gear to the top of the camper. If you do choose to add a roof rack to your machine, you'll also be able to bring along things like a portable shower or awning. The rear-mounted rack even lets you mount an MTB or small motorcycle to the rear.

One final detail I found about this camper was the inclusion of a storage box found at the front, complete with AGM batteries and gas-can mounts. A hitch receiver also lets you customize your towing capabilities based on the needs of your journey and is Max Coupler capable.

If you want to see this little bugger in action, I've added a little video provided by the manufacturer that shows how the habitat fares against a rock garden and a rather soliciting hill climb; it really shows just how nimble this puppy can be. It looks to have what it takes to make your list of habitats to consider for your next purchase. 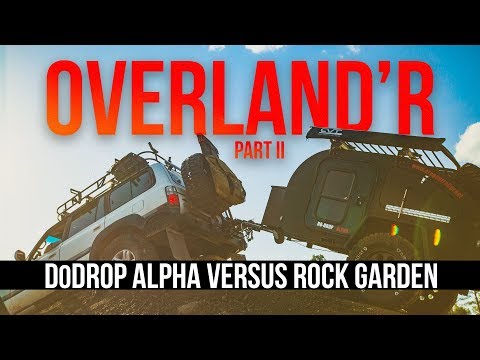