4 Tesla Owner Made His New Model S Plaid Sound Like a Hellcat, the Internet Said "No"

Consisting of Mickey Andrade, Evan Beckerman, Quinn Clark, and Ricky Fernandez, the peeps at throtl have challenged themselves to yank out the free-breathing V10 of a 2001 model year Dodge Viper RT/10 in favor of a supercharged V8. It’s not any ol’ crate engine, though, but a Dodge HEMI Hellcat in Redeye specification, which packs 797 horsepower.
6 photos

The force-fed mill also produces 707 pound-feet (959 Nm) right off the bat, which is more than adequate for a car like the Viper from that era. The V10-engined sports car tips the scales at 3,460 pounds (1,569 kilograms) as per the period literature from Dodge. By comparison, the non-Widebody Challenger SRT Hellcat Redeye weighs 4,415 pounds (2,003 kilograms).

Also worthy of mention, the Viper RT/10 from the 2001 model year belts out 450 horsepower and 490 pound-feet (664 Nm) of torque at the crank. Those were amazing numbers back in the good ol’ days, but the automotive industry never ceases to advance, for better or worse. The Mercedes-AMG C 63, for example, currently packs a four-cylinder turbo and a plug-in hybrid system that make 671 horsepower and 553 pound-feet (750 Nm).

Dodge supplied the throtl crew with the Hellcrate Redeye 6.2-liter HEMI engine and control unit, a six-speed manual in the guise of the Tremec T56 that’s capable of handling over 700 pound-feet (949 Nm) of torque, as well as $10,000 for any other parts they might need to complete their build.

The “world’s first Hellcat Redeye-swapped Dodge Viper” will be raced at the 2022 Dodge Direct Connection Grudge Match on August 13th, a central part of the MotorTrend Presents Roadkill Nights Powered by Dodge. To whom it may concern, Roadkill Nights is an annual event that features sanctioned street racing on Woodward Avenue in Pontiac, Michigan.

The Viper, meanwhile, was discontinued with a whimper instead of a bang in 2017. Fiat Chrysler canceled the V10-engined sports car in October 2015, citing sales and the safety regulation that requires side curtain airbags. 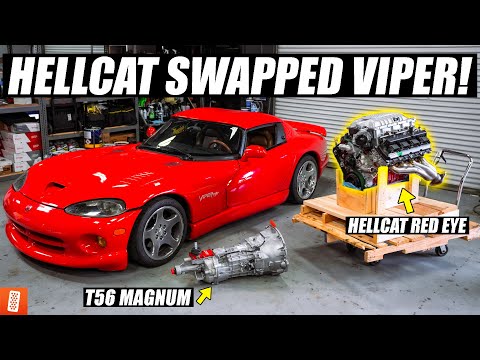