5 2021 Dodge Charger and Durango Get Ready to Pursuit the Baddies
Car video reviews:
Up Next

But is it worth saving the aforementioned sum and settle for the SRT variant of the Dodge Durango, or should you go straight for the Hellcat model, knowing that it boasts more power than the Lamborghini Urus? The answer could vary from person to person because it ultimately comes down to each individual’s needs.

With that off our chest, let’s move on to the reason why we are all here: a drag race between the Dodge Durango SRT and Ford Explorer. The latter appears to be in the ST specification, with its 3.0-liter V6 EcoBoost engine pumping out 400 HP. That’s already 75 HP less than its rival from the Stellantis Group, so surely the Dodge would have no problem beating it into submission, right?

Actually, wrong, because as you are about to see for yourselves, the Explorer is truly unstoppable down the quarter-mile, completing the sprint in almost 11.5 seconds. The Durango, on the other hand, did it in over 12 seconds.

Now, don’t go anywhere yet, because the best has yet to come, as in the second and third races, the same Ford Explorer was challenged (pun intended) by a Dodge Challenger R/T Shaker. The muscle car also holds the upper ground in terms of power, with its HEMI V8 kicking out 482 HP. So, it would probably have no problem putting the Blue Oval’s high-rider in its corner.

That’s for you to find out by clicking the play button on the video that follows. Oh, there’s also a bonus drag race toward the end of the clip, so make sure you don’t miss that one either. 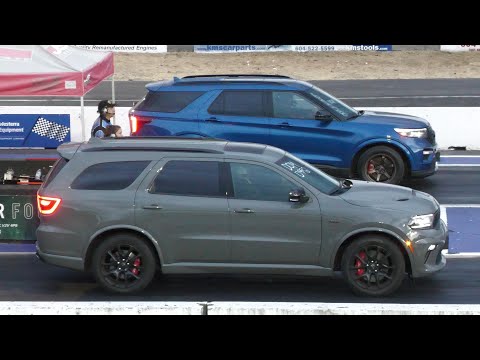