3 Production Hennessey Venom F5 Has Arrived, Should We Prepare for a New Record?

McLaren Sabre Photographed Ahead of Launch, Looks Like a Le Mans Racer

Aurel Niculescu
While the last Dodge SRT Demon rolled off the production line more than two years ago, the limited-run extreme widebody makeover of the Challenger is still a great recipe for stock drag racing fun. Especially when a skilled driver is involved, as proven by its launch and overall time consistency when going against a couple of Hellcat Challengers, a C7 Chevrolet Corvette ZR1, and even a turbocharged Ford Mustang.
23 photos

Usually, it’s hard to tell stock vehicles apart, but this time around, we’re pretty sure this is the same Dodge Demon we saw a few days ago going against Steeda’s naturally aspirated Ford Mustang GT “Silver Bullet” project.

Well, it’s not that hard to figure that out when this new video from the Drag Racing and Car Stuff channel on YouTube also features one of the races between the Demon and the Steeda Silver Bullet. But we’re not interested in that particular skirmish anymore.

That’s because the focus is on the all-black Dodge Demon on this occasion, as it goes up against an eclectic roster of competitors – including a couple of Hellcat-powered Challengers, a C7 Chevrolet Corvette ZR1, and a feisty Ford Mustang.

We noticed the Demon driver’s skills from the previous encounter, and now there’s solid evidence that he or she has the magic touch – the timed runs show very little variation, from a flat 10 to just 10.14 seconds. That’s pretty much unbelievable, if not for the digital clock proof – and believe us, we checked twice, just to be sure.

Still, the Demon didn’t take home the victory across the board. We have a feeling that most encounters were between a stock Dodge (the black Demon) and modified cars, as the two Hellcat Challengers dip below the ten-second mark (the first one scores a 9.71, the second an even better 9.35 result).

The turbocharged Mustang easily hinted at its performance levels even before sprinting off the line – the brake parachute was a clear giveaway of a spectacular end result of 8.37s at 162 mph (261 kph).

Actually, the only competitor to lose a race against the Demon in this video embedded below is the C7 ZR1, which also showcases the complete opposite to smooth launch skills in the process... 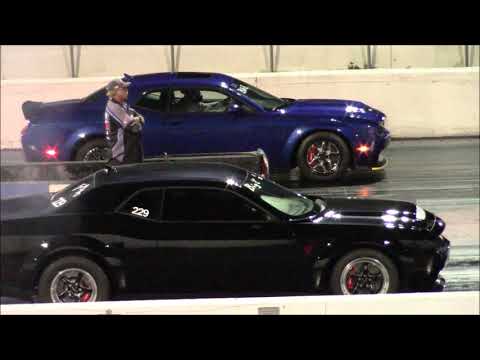