2 Ninja vs Demon: Flagship Dodge Challenger Gives Kawasaki ZX-14R a Reason to Get Worked Up

3 Tesla Model S Plaid vs Modded Kawasaki Ninja ZX-14 - "How the Hell Did You Beat Him?"

4 Hemi Cuda Gets Challenged by Kawasaki Ninja, the Gap Is Big

Quite a Phenomenal Flight, Rita Ora and Taika Waititi Fly in an Embraer Phenom 300E

Home > News > Auto Motorsport
Cristian Gnaticov
All hell broke loose at the Mission Raceway Park in Canada not long ago, where the Dodge Challenger SRT Demon decided to stretch its legs by taking on the Kawasaki Ninja.
6 photos

Wait, isn’t the superbike suppose to humiliate it down the quarter-mile? Actually, that would be a yes, though mastering all that thrust during takeoff, and struggling to keep the front wheel on the ground at all times, is very tricky.

Still, the Challenger SRT Demon, which was retired some four years ago and is still more powerful than today’s SRT Super Stock, isn’t that friendly with those holding the wheel either. Sure, it may not pull a wheelie without some serious modifications, but it is still tricky to launch it properly, even on the factory-supplied drag radials, hence why it lost some battles against lesser opponents.

On that day, however, the odds appeared to be in its favor, as just as the lights turned green, it took off like a bullet, a hair quicker than the big bad Ninja. The rider tried his best to catch up with the muscle car as both were approaching the end of the ¼-mile, and as they crossed the finish line, only a couple of tenths of a second separated them. One of them was clocked at 9.18 seconds, with an exit speed of 150.65 mph (242.45 kph), and the other one at 9.41 seconds, with 147.97 mph (238.13 kph).

Now, you might be wondering which one managed to run the quarter-mile first, and rightfully so, though we won’t spoil the outcome, so you know what to do in order to find out. The Ninja vs. Demon action starts at the 6:15 mark, yet we’d watch the entire video if we were you, because it shows more battles between superbikes and ultra-fast cars, and some of the results will probably surprise you. 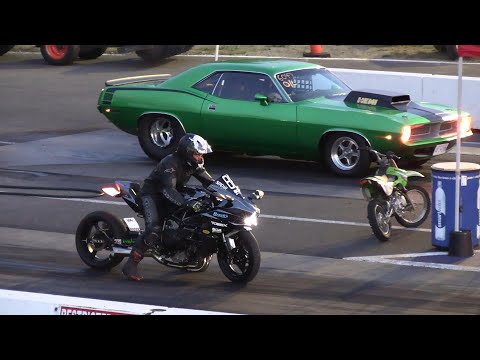