1 Tuned Dodge Charger Drags Shelby GT500 and Hellcats, It Is Quite and Evenly Close

5 Drag Racing Essentials 101: Welcome to the Track
Car video reviews:
Up Next

There are many forms of “this versus that.” But as far as automotive drag strips are concerned, the endless possibilities are slightly narrowed down to a few “tons” of choices.
22 photos

Even when only considering the prepped surface of America’s dragstrips, options remain pretty vast. So, just a couple of cars can easily fit into more than one category. Case in point, the videographer behind the Drag Racing and Car Stuff channel on YouTube just posted a new race that gives us yet another sample of USA vs Japan, albeit in sedan vs coupe form.

Unfortunately, these couple of races are not localized in time and space, as there is no information about when and where these skirmishes took place. All we know is the prepped surface adheres to the IHRA (International Hot Rod Association) rules. And this at least is better than nothing.

Anyway, luckily the competitors are slightly more fleshed out. As in knowing that we are dealing with a white Dodge Charger SRT 392 Scat Pack. As well as a facelifted, black 2019+ Lexus RC F, identified by the lack of a separate rear wing. Hey, what do you know? They not only fit the USA vs. Japan and sedan vs. Coupe brackets, but also the Yin vs. Yang or night vs. day categories, for anyone keeping track.

As for the action, it’s one to hold your breath for, even if the ETs and trap speeds are not exactly stupendous. But the racers do make that up with a cool photo finish. At least as far as the first round is concerned. Both have great starts, and ultimately, it’s the sedan alumni that snatches a nail-biting victory: 12.88s versus 12.89s!

Round two kicks off at the 1:20 mark. And this time around it’s a little easier for the American sedan to show its JDM foe who is the quarter-mile, high twelve-second boss. As such, the Charger SRT 392 Scat pack nails an improved 12.7s pass against the RC F’s slightly lesser 12.91s run. Nice effort from both, though! 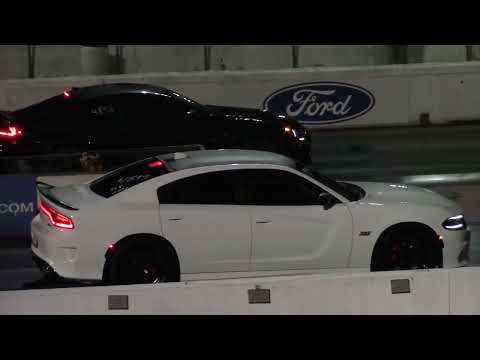