The people who buy Dodges are usually the ones who look down on Korean and Japanese cars with smaller engines. Revenge is hard to get, but we have found out that the Dodge Charger RT with the 5.7-liter can indeed get walked by the Kia Stinger GT.
7 photos

Drivers looking for an exhilarating sedan often find themselves behind the wheel of a Dodge Charger. It's a rare American four-door with a V8 and muscular body, like they built them in the good old days. And if you're looking for a good deal, the 5.7-liter HEMI V8 is tempting.

It sounds fast, but that's not fantastic by today's performance standards. Now, we're not saying the 5.7-liter is all bark and no bite, but we're dealing with a large, heavy sedan, so if living your life a quarter-mile at a time is your thing, start with the 392 HEMI, the 6.4-liter from the R/T Scat Pack.

We mentioned Korean opposition right at the beginning of the video. This comes in the form of the Stinger GT AWD with its 3.3-liter twin-turbo V6. It's hooked up to an 8-speed auto, just like the Dodge, and the output numbers are about the same at 365 hp and 375 lb-ft of torque.

However, the Kia is ready for battle. During this Canadian drag race shootout, it walks the Charger like it's some random family car. YouTuber Sam CarLegion, who shot the video, believes this is down to the AWD traction. However, it's still a problem that can be solved with more power, as the 6.4-liter Charger performed better against this Stinger.

Now, we have to also point out that in a rolling race, the result is less one-sided. So don't go thinking you've got a V8 annihilator if a Stinger GT is in your driveway. Call it a biased opinion, but we also find it hard not to side with the Charger. It's such a cool-looking thing in this yellow Daytona spec. 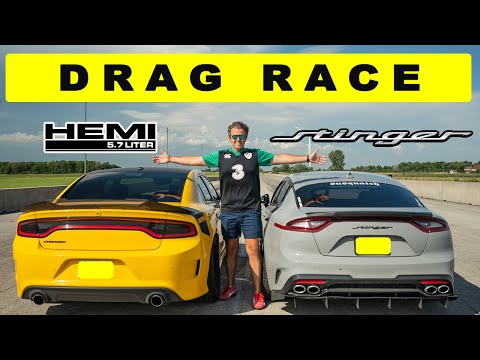