3 Ever Wondered What a Dodge Charger on 34-Inch Wheels Looks Like?

5 Dodge Charger Gets Infected by the Donk Virus, Won’t Go See a Doctor About It
Coverstory

Cristian Gnaticov
Besides vehicles that look like they’re doing squats or pushups, nothing screams ‘look at me!’ more than oversized wheels in the world of custom cars. That said, let's take a close look at this Dodge Charger, modified for show-and-tell purposes.
8 photos

Spotted over the weekend at a car meet in the U.S. of A., the car has 32-inch wheels, shod in very thin rubber, that required a lot of chopping to fit under the arches.

As it appears, the rear wheel arches are far from being perfect, but the people behind this project called it a day, nonetheless, and went on to give it a custom paint finish. The chameleon color is said to have taken Car Show Customs a few days to apply, and works quite fine with the copper looks of the wheels – if you’re into this kind of stuff, anyway.

This build reminds us of yet another Charger, with an orange paint job and massive wheels, believed to be 34 inches in diameter. That one was spotted a few weeks ago on the back of a trailer, likely going to or coming from a car meet.

As much as anyone would like to sweep such projects under the rug and pretend they don't exist, they aren’t going anywhere. Proof stands yet another Charger that we covered back in July, with a white body and matching wheels that follow the oversized trend. Mind you, that one was still a work-in-progress, apparently, because the body panels did not align, and it was missing the reflectors from the rear bumper.

Now, if your life depended on it and you had to choose, which one would you get and why? For some reason, we’d probably get the orange example, because it was better done, but only if it came with the trailer, because no one in their right mind would want to drive it on the road. 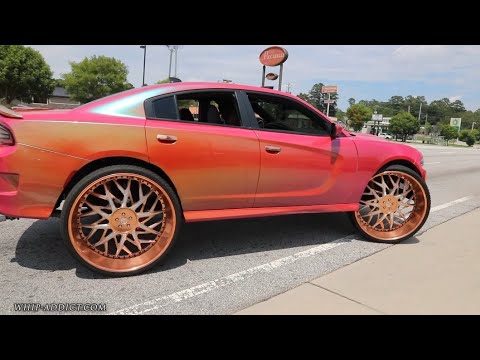