2 C7 Chevy Corvette ZR1 Drags R35 Nissan GT-R, Grudge Race Is As Close As It Gets

3 Cadillac CTS-V Wagon Drags Turbo Pontiac Trans Am, Gets to Show Who's a Sport Boss

Although some of the muscle cars in question are proper legends, people still love to make fun of them. The Mustangs have their fails, while Dodge’s Hellcats are deemed heavy and powerful... but still unable to deliver a proper dragstrip launch. But there are exceptions.
16 photos

One of them would be the crimson Dodge Charger SRT Hellcat that became the focus of a recent feature by the good folks over at the Drag Racing and Car Stuff channel on YouTube. The action takes place at the iconic Rockingham Dragway (a 30k-strong venue) in Rockingham, North Carolina, on a sunny day.

Not many of those will be available as we progress towards the dreadful winter season, so it’s best to take advantage of every quarter-mile skirmish while there’s still fair weather. No worries about these racers not jumping at the occasion of proving their car’s worth, though.

So, first up the roster against the Dodge was none other than “America’s sports car” in its latest and hottest incarnation, the mighty mid-engine C8 Stingray. The fat rear tires proved this Chevy meant business, so we braced for a heated encounter.

Still, it was quite surprising, including for the channel’s fans, to see the Hellcat jump off the start line so quickly. Thanks to its great launch, it took command of the race and never let go, winning with a 9.98s ET to C8’s 10.49s result. Not bad at all, but still not enough to win against this feisty SRT.

Next up, from the 1:02 mark came a BMW 3 Series (E90), which – according to comments – may or may not have been a slightly modified 335i. But we’re not so sure. And it didn’t matter because the Hellcat rushed past this battle like a rocket at takeoff (9.95s versus a shameful 12.49s).

Thus, from the 1:55 mark, we arrive at the ultimate battle of the video embedded below. This time around, the Hellcat was up against an Audi RS 3, and we already have prior experience with these little Ingolstadt wonders. It didn’t disappoint on this occasion either, and although it didn’t win (10.45s vs. 10.28s), it certainly gave the Hellcat a few shivers down the kitty spine... 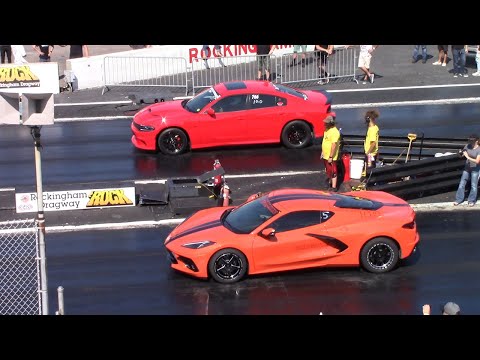