2 James May Roasts the Dodge Charger Hellcat, How Bad Is It in Captain Slow's Vision?

A Dodge Charger SRT Hellcat and a Ford Mustang EcoBoost were recently filmed at a drag racing event, apparently at the Las Vegas Motor Speedway, going head-to-head down the quarter-mile. And you know how it ended, don’t you?
7 photos

Why, of course you do, as 'Hellcat' and 'EcoBoost' don’t really belong in the same sentence for the simple fact that the former packs a whining V8 under the hood, whereas the latter uses a four-pot, with turbocharging.

As far as the specs are concerned, without anyone messing around with its supercharged 6.2-liter V8, the Dodge Charger SRT Hellcat has 707 horsepower and 650 pound-feet (881 Nm) of torque on tap. It can hit 60 mph (97 kph) in 3.6 seconds, and can deal with the quarter mile in just a little under 11 seconds.

The Ford Mustang EcoBoost, on the other hand, takes almost forever to run the standing quarter mile, and in terms of 0 to 60 mph (0-97 kph) acceleration, it can easily be challenged (pun intended) by some of the best hot hatchbacks. Powering it is a turbocharged 2.3-liter four-cylinder engine that is capable of pumping out a little over 300 horsepower.

Now, this would be a good time to wrap it up and invite you to scroll down to the video embedded down below, and click the play button. The clip is a little over a minute long, so you don’t need to take a long break to see the difference between a Hellcat and an EcoBoost in a straight-line battle. 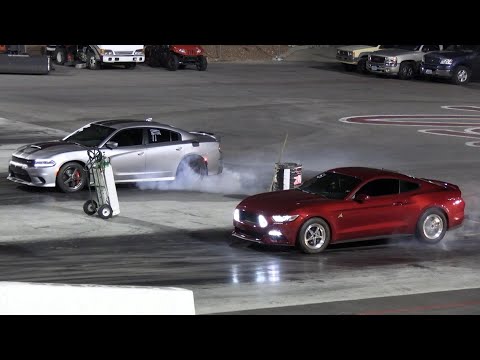