A BMW M8 Competition Coupe was recently set loose at the Bradenton Motorsports Park, in Florida, against a couple of full-blown exotics made by McLaren and Ferrari. But that’s not the highlight of the clip, otherwise embedded down below, as it also tried its luck against a Dodge Charger SRT Hellcat.
6 photos

Well, ‘tried its luck’ may be an overenthusiastic way of describing the race that had one clear winner. Was it the muscle sedan? Was it the European sports coupe with a GT flair? That’s for you to find out by watching the clip, which is only a little over a minute long and shows the said drag race towards the end.

Before you do that, however, let’s go through some of the specs of both cars, starting with the Charger SRT Hellcat, as it holds the upper ground in terms of sheer power. The ubiquitous supercharged 6.2-liter V8 engine pushes out 717 hp and 650 lb-ft (881 Nm) of torque, with these numbers growing to 797 hp and 707 lb-ft (959 Nm) in the Redeye. From 0 to 60 mph (0-97 kph), you are looking at under 4 seconds, and the quarter-mile is dealt with in roughly 11 seconds, a or a bit quicker.

It may have less power than the four-door Dodge, but the M8 Competition is quicker. The 0 to 60 mph (0-97 kph) acceleration is dealt with in a little over three seconds, and if ordered with the optional M Driver’s Package, it tops out at 189 mph (304 kph). Under the hood, it has a twin-turbocharged 4.4-liter V8 engine, rated at 616 hp and 553 lb-ft (750 Nm), working in conjunction with a dual-clutch eight-speed automatic transmission, and rear-biased all-wheel drive system.

Now, before wrapping it up and calling it a story, do you think the BMW M8 Competition Coupe has what it takes in order to put the bad Dodge Charger SRT Hellcat in its corner? The balance definitely tilts in its favor when it comes to the straight-line performance, and it can obviously teach it a lesson about fast cornering.

Nonetheless, let's not forget that the American model has much more oomph available via the loud pedal, and that, on a good day, with sticky tires on its feet, and someone who knows what they're doing holding the wheel, it is incredibly fast down the quarter-mile, while still rocking the standard oily bits. And speaking of possible mods, with a decent amount of work, it can bully supercars all day, any day. This would be a good time to place a little bet and speak your mind about it in the comments area down below, before hitting the play button on the video that follows. 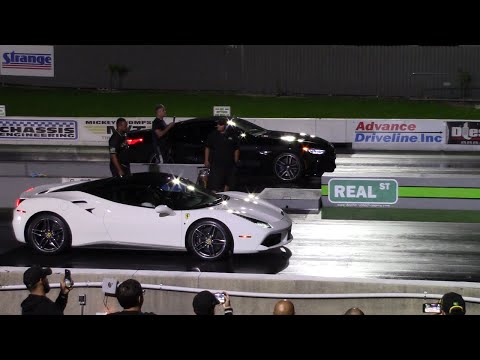