High-end sedans have become so fast that they’re now pulling 9 seconds down the quarter-mile on a constant basis. Tesla’s Model S Plaid is the best example, as it can literally give most stock super sports cars a black eye in a straight-line sprint.
7 photos

However, this story isn’t about the zero-emission model, but the mighty Dodge Charger SRT Hellcat, and one of the best premium compact sedans that Europe has to offer, namely the new BMW M3.

The two met at the Bradenton Motorsports Park in Florida recently for a quick acceleration run. So, do you think you can spot the winner? Probably, but even so, let’s remind ourselves what they are capable of, starting with the four-door born in America, and equipped with the famous Hellcat engine.

It is obvious that the Charger SRT Hellcat holds the upper hand in terms of power, but their performance is quite similar. So, does that mean that the M3 actually stands a chance against it? Only one way to find out. 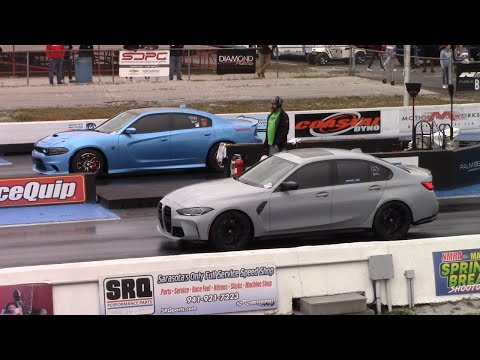