5 Dodge Charger Daytona SRT Concept: The Shape of Things to Come
Up Next

Vapor 55 MX Helicopter Drone Can Lift 22 Pounds of Military Gear, Get It Where It’s Needed

Dodge Charger Daytona SRT Concept Lowers Its Roof, Do You Like It Better as a Convertible?

Cristian Gnaticov
The Dodge Charger Daytona SRT Concept continues to light the flame in the hearts of enthusiasts and rendering artists alike, and having greeted the media at the 2022 Detroit Auto Show yesterday, it has now unofficially lowered its roof.
6 photos

Thanks to Theottle, the all-quiet show car from the Stellantis-owned brand, which previews Dodge’s electrified future, now has an open-top view of the sky above. The digitally chopped roof and the B and C pillars have given the Charger Daytona SRT Concept a summer-like look, which is a little bit late, considering that it is already fall in the northern hemisphere.

As everyone who knows a thing or two about cars knows, turning any model into a convertible means having to reinforce the body. Thus, a hypothetical open-top variant of the Dodge Charger Daytona SRT Concept would be heavier than the real thing. As a result, it would be a hair slower in a straight line and wouldn’t be that fun to drive on twisty roads, either.

Now, could Dodge be planning a convertible based on their brand-new zero-emission show car, or maybe of the upcoming production model that it previews, which should make its way to showrooms for the 2024 model year? Only time will answer this question, and if we were to bet on it, we’d say that there is a 50/50 chance of it happening.

We will end this story by reminding you that the automaker still hasn’t released any performance numbers for the Charger Daytona SRT Concept. Thus, we don’t know how fast it is from 0 to 60 mph (0-97 kph) or what its top speed is. Heck, we don’t even know how much power it has available via the right pedal, though Dodge has said that it is quicker than the Hellcat versions of the outgoing Charger and Challenger. Guess we'll have to take their word for granted. 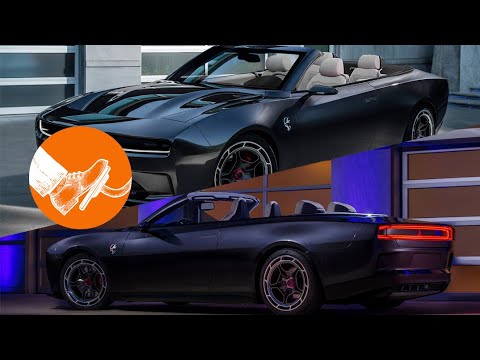