1 Challenger Scat Pack vs. The Detroit World Is a Lesson Full of Quick Drag Runs

For some people, not even the Hellcat engine is enough. But there's a lot of performance and fun to be had in regular Dodge muscle cars like the Charger 392 and the Challenger Scat Pack. So aren't you curious how they compare to an import like the Kia Stinger GT?
5 photos

At first glance, these cars have nothing in common, but they're all designed to appeal to enthusiasts while still being usable on an everyday basis. And just like the Charger, the Stinger GT has four doors. According to Gregory Guillaume (Kia's Chief Designer), the Stinger's design was partially inspired by the Coca-Cola bottle, so they must have had at least one muscle car in their inspiration folder.

Kia did have access to a V8 engine; the Stinger is based on a shortened version of the Genesis RWD platform, and that used to come with a 5.0-liter in things like the G80. But for its sexy coupe, the Korean automaker decided to go with a twin-turbo 3.3-liter.

The V6 is hooked up to an AWD system and an 8-speed automatic. It's lighter than a Dodge, but only by about a passenger's worth. On the other hand, the American rivals don't have the best traction situation.

While the Challenger does have its own GT trim level with AWD, that only allows you to order a V6 engine. If you're wondering how that stacks up in a drag race, we've got a shootout against the VW Arteon and Honda Accord to show you.

But anyway, if you look at the power, the Stinger is at an obvious disadvantage. Both the Challenger and the Charger have their 392 groove going on, which means a gigantic 6.4-liter V8 resides under the hood. There are no turbos or superchargers, just 485 horsepower of raw goodness. It would be really entertaining if a 365-horsepower Korean car somehow won all this.

As is always the case with a Sam CarLegion video, the racing is done in stages. Sometimes, the Stinger can get a good launch, but you can tell Dodge makes cars that live on the drag strip. But the YouTube vlogger argues that with a good tune and more than 400 hp, the Stinger could be just as quick. 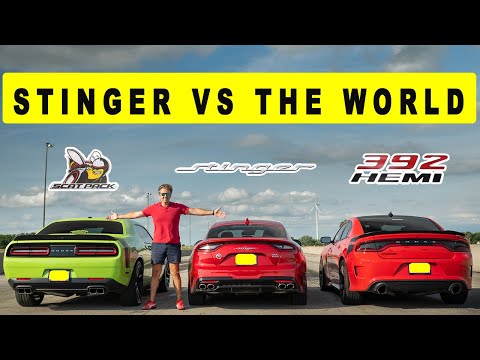