Electric vehicles have long overcome their dull status, and they have Tesla to thank for. Elon Musk’s company basically reinvented the segment with its hot rides, throwing the ball in the backyards of the mainstream automakers, and forcing them to come up with worthy opponents to their range.
8 photos

Now, the game is obviously on for dropping that time even more, but that’s a totally different topic. As a matter of fact, the electric vehicle sitting in the white corner in the video embedded at the bottom of the page is not exactly in the hot Plaid flavor, but even so, it can still post fast quarter-mile times.

At the end of the run against one particular Dodge Charger, it did a little over 11 seconds, with a 123 mph (198 kph) exit speed, proving that you don’t necessarily need the Plaid in order to enjoy a day at the strip.

As for its ad-hoc rival, it appears to be in the Scat Pack specification, and that’s nothing to write home about, as all eyes are on the Hellcat-powered models these days. Still, it too packs a V8, albeit a 392 HEMI, which kicks out a very decent 485 hp and 475 lb-ft (644 Nm) of torque, and in this configuration, it won’t break the bank, with a $42,800 MSRP.

So, do you think the Charger stands any chance against the Model S in a head-to-head battle? You are about to find out, so you know the drill. 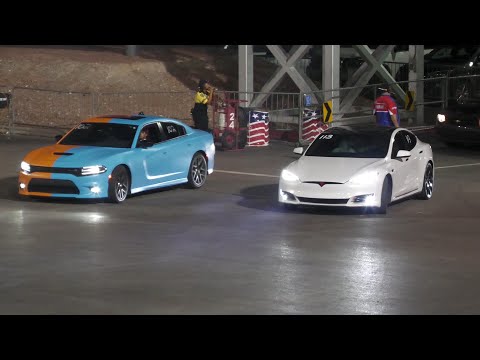