Dodge Challenger With Viper V10: All-Motor Dragster Being Driven on the Street

Muscle cars are supposed to have V8 engines, preferably big ones. But adding an extra pair of cylinders is only going to make things better. Proving that this is the case, AutotopiaLA recently got to check out a Dodge Challenger powered by a Viper V10 engine.
14 photos

Honestly, this sounds like a fantasy car, combining exotic American supercar technology with what's maybe the purest muscle car of the modern era. Though not many people know it even exists, this is a combination that Dodge made happen for its most hardcore drag racing enthusiasts.

If you're a Hellcat fan, you've probably heard of the SRT Super Stock. It's a pretty rare but quite famous machine. It's got 807 horsepower, one less than the Demon. Built to dominate the quarter-mile, subtracting the seats and procuring some sticky tires.

This is its ancestor, the 2011 Mopar Challenger V10 Drag Pak, though it's also referred to as Super Stock. Under the hood is the "512" Viper engine of the era, which in stock form pushes 600 horsepower to the race-spec 2-speed automatic and a solid rear axle that has ratios for quarter-mile times.

The owners of the car, Fusion Motor Company (who make the Eleanor), point out that Dodge never actually released horsepower numbers. The 600 ponies are based on the Viper at the time, but this has racing headers and is not emissions-compliant. Even so, it doesn't explain the claimed 900 horsepower in the video title.

Did we mention it's not street-legal? It's got no side mirrors, no safety features, no power steering, and zero creature comforts. They managed to save something like 500 pounds (250 kg) compared to a V8 road car. Yeah, even so, AutotopiaLA does a couple of passes, which is a pretty rare sight, courtesy of dealer plates being fitted.

Dodge only made 70 of these for the 2011 model year, and they were asking around $85,000. Of course, getting one was pretty difficult, and #47 in this video also comes with the $8,000 Competition Pack which included a full roll cage, safety harness for the two bucket seats, and a window net just to let sniff the race fuel in the morning. 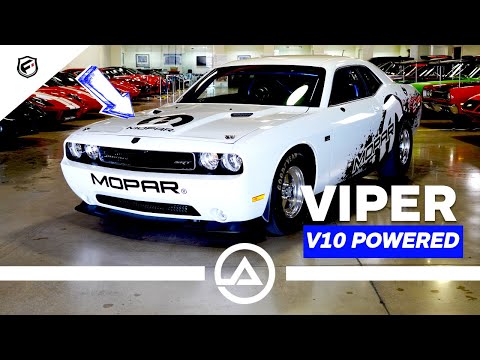