They say that sedans, just like minivans, are a dying breed. It’s true, popularity has skyrocketed for anything that remotely resembles a crossover, SUV, or pickup truck. But, even if history will see them retired, it doesn’t mean the classic body type isn’t going down without a fight. Perhaps even a drag strip one, lining up against a hugely popular muscle car representative.
8 photos

Dodge has been pitting the third generation Challenger since 2008 against anything people will throw at it. The usual suspects are easy – it's the Ford Mustang and Chevy Camaro lot. But the company has perfected the Challenger recipe over time for a vast array of encounters, hence the incredible number of variants.

The one seen here in red attire seems to be of the plain 5.7-liter HEMI V8 variety, according to comments made by followers of the Drag Racing and Car Stuff channel on YouTube. A recent video (embedded below) surprised the Challenger lining up against an unlikely contender – a tenth-generation Honda Accord.

Surely enough, we have seen many interesting encounters from the D.R.A.C.S. channel (from a Ford Edge and Fusion seeking night-time glory to lady-driven F-150 Raptors or nine-second Demons) to be able to watch this unlikely meeting with an open mind.

And that was a good thing because it clearly prepared us for the surprising result. Basically, without knowing anything in advance about the two cars, anyone with a little experience probably wouldn’t give the win to the white Accord.

But in the wonderful world of sticky tarmac drag racing, anything can happen, and it certainly will. So, after the Challenger takes off slightly better, the Japanese sedan makes up for the loss and even manages to snatch a close-call victory.

Naturally, one has to wonder if the Accord was stock or not – and we’re inclined to believe user comments that hinted at the Japanese sedan being equipped with the zippy 10-speed automatic, as well as a FBO (full bolt on) and an E30 blend. 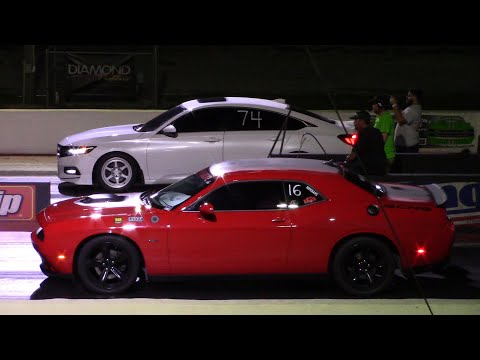