1 Dodge Has Selected Its Chief Donut Maker, You Can Watch How It Went Down

What is a “faux pas”? Technically, it’s a social blunder of sorts, one that’s meant to be either embarrassing or tactless. In order to commit such an act during a drag race, one must either overestimate their car or underestimate their opponent’s car, although in some rare cases, people have been known to do both.
6 photos

We’re not sure which scenario applies to this particular drag race, but when the driver of that burgundy Hellcat decided to line up next to a Porsche 911 Turbo at the Speed World Dragway in Orlando, they did so while ignoring one of the cardinal rules of drag racing: never race a 911 Turbo unless whatever’s underneath your hood would make Dom Toretto jealous.

Electric vehicles and hypercars aside, the Porsche 911 Turbo / Turbo S deserves to be in the same category as the McLaren 720S. Both supercars, both capable of hypercar-like acceleration. To think that you could defeat either the Porsche or the McLaren in a Dodge Challenger is inherently unrealistic, unless you’ve got a Demon, the Demon Crate, plus perfect conditions outside.

The 911 Turbo is insanely good at putting its power down, one of the best in the world and possibly the best among its direct rivals. The one we see here appears to be a 991.2 variant, which means it was built between 2015 and 2019.

Regardless, the “entry-level” Turbo can still get you to 62 mph (100 kph) in 2.9 seconds, which is considerably quicker than what you could get from a Challenger Hellcat, despite the latter putting down 717 hp and 656 lb-ft (900 Nm) of torque. 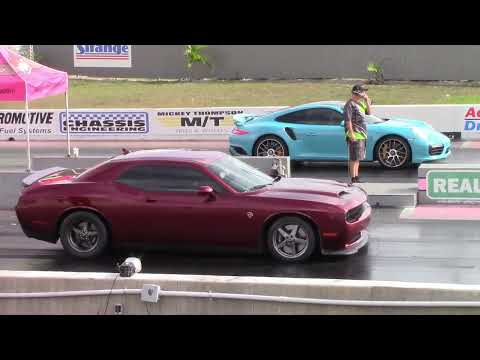