1 Twin Turbo Lambo Huracan Drags Nissan GT-R and 911 Turbo, It's Not Even Close

5 Dodge Charger and Tesla Model S Go to ¼-Mile War, Someone Gets Totally Owned
Car video reviews:
Up Next

In an interesting turn of events, today, when a high-performance Tesla lines up for a quarter-mile skirmish at the dragstrip, it usually gets credited with the first chance. Of course, did we not talk about expecting the unexpected?
13 photos

Although many uninitiated would probably consider drag racing the easiest form of motorsport out there because of its straight-line nature, just as many know better. After all, dragsters have been showing for decades that it’s just as enticing, expensive, and mind-blowing as any other high-powered motorized sport out there.

And what is best is that even when (apparently) stock vehicles are involved, things can be just as entertaining and surprising... without spending fortunes on corporate team budgets. Anyway, here is an example from the videographer behind the Drag Racing and Car Stuff channel on YouTube, who brings us a couple of nightly encounters between two brash nameplates.

Interestingly, after a few years of Tesla performance vehicles toasting ICE-powered legends, one has started to assume their vehicles would start just about any duel with the first chance. And seeing a Tesla Model 3 Performance ready to duke it out with a Dodge Challenger SRT Hellcat (not a Demon or Redeye, remember) would usually have us thinking the same. Even if the former has less power - it usually compensates with AWD and instant torque.

But as it turns out, that night was an ICE party. So, Dodge Challenger fans might rejoice during the video embedded below, while Tesla aficionados probably need to look away for a little over a minute and a half. Without further ado, here’s how things got down.

A black Hellcat met at an unmentioned racetrack with a blue Model 3 that seems to be a dragstrip denizen judging by the proud display of window stickers. Round one kicked off at the 0:39 mark with both leaving strong off the line... but soon it was a bit obvious the Hellcat was faster. Case in point, an 11.2s versus an 11.57s result. 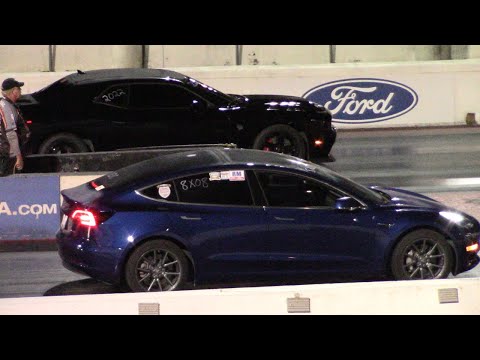