5 Is It Time for Tesla to Start Signaling When FSD Is in Use to the Rest of the Drivers?
Car video reviews:
Up Next

DLR Has Developed a Teleoperation Workstation Prototype for Self-Driving Vehicles

When it comes to vehicles with an SAE Level 4 automation, self-driving technology is what’s most talked about. While that is essential, the German Aerospace Center (DLR) is highlighting the importance of teleoperation technology while researching and working on a future workstation for these types of operations.
7 photos

Based on the official classification of systems for autonomous driving established by SAE International (formerly the Society of Automotive Engineers), vehicles that are almost completely autonomous but still require technical supervision are qualified as a Level 4.

In Germany, the specific legislation that sets the framework for these types of vehicles came into force last year. According to these regulations, autonomous cars could operate in certain designated areas or on specific routes with teleoperation.

Considering that these SAE Level 4 vehicles will most likely be shuttles for passenger or cargo transportation, the teleoperation workstations would have much in common with those of flight controllers, for instance. Operators would need to stay in a state of constant alertness, monitor several vehicles, and be able to respond quickly.

This is why DLR focuses on “the interaction between humans and automation,” and this ranges from the human-machine interface itself (HMI) to the design of the teleoperation workspace.

They have successfully built a workstation prototype for the in-depth testing of various teleoperation aspects, such as the maximum number of vehicles that can be monitored by an operator, the time it takes to process a request for assistance or the kind of information that is needed to deliver this assistance.

As they begin to operate on a regular basis, future self-driving shuttles will encounter different challenging situations which they perceive as unknown, and that’s when remote operators are supposed to respond and decide as fast and as efficiently as possible.

At the same time, DLR is also working on several hybrid-electric concept vehicles that combine the benefits of zero-emissions with advanced self-driving technology. 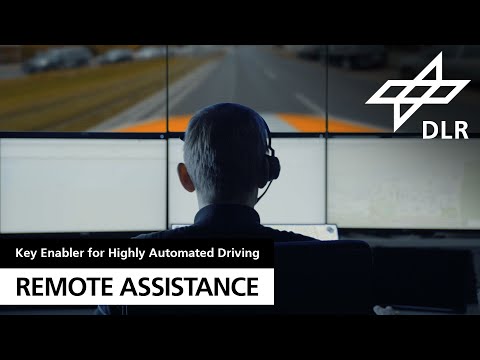