5 What Happens to a Hovering Drone in a Moving Car?
Car video reviews:
Up Next

The DJI brand has been working on a new drone for some time. A year after the release of the Mavic Air 2, its successor is already here, and it looks like it's been worth the wait. After the recent debut of DJI FPV, the Air 2S is now making its way on the market with significant upgrades.
8 photos

Compared to the Mavic Air 2, the new drone seems to come with quite a few upgrades, from the 0.5-inch chip to a 1-inch 20MP CMOS sensor.

Additionally, the image quality gets a great improvement in both resolution and AI features. The new sensor also supports features such as 10-bit color and RAW format photos.

The new DJI Air 2S can capture footage in 5.4k at 30fps or in 4K at 60fps. It includes QuickShot aerial effects, Hyperlapse functions, and panoramic shots. The updated FocusTrack mode includes several pre-programmed settings such as Spotlight 2.0, ActiveTrack 4.0, and Point of Interest 3.0 that improve flight and obstacle avoidance preferences.

The battery time lasts about 31 minutes, provided that the drone is operated in low wind, and it takes around 70 to 80 minutes to charge.

The drone comes with an improved HDR mode that enables shooting in bright light or dark shadows. The Air 2S is equipped with motion sensors and APAS 4.0 technology, and it also benefits 8 GB of built-in storage.

The DJI Air 2S uses four antennas and the latest version of the OcuSync transmission technology, OcuSync 3.0, that made its debut with the DJI FPV drone. Its improved system enables the transmission at up to 12 km (7.5 miles) away, with two more over the OcuSync 2.0. 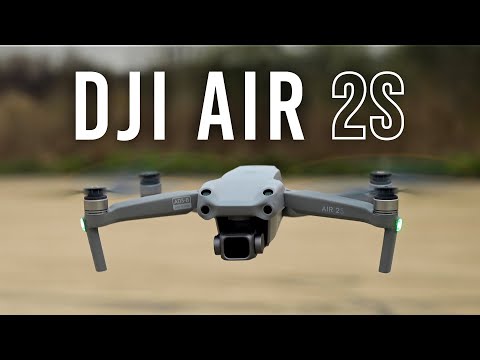