Harley-Davidson Wolf Stands Proud Like the Wild Beast, Not as Fierce

Sometimes, the mirage of owning a customized pickup truck is stronger than the project’s budget. So, even family dads sometimes go berserk, but in the best kind of way. And the result, in this case, is absolutely stunning.
62 photos

We have seen a lot of cool builds across the Chevy C10 and Ford F-100 lot over the years. Some were gorgeous (both from the design and technical standpoint), others were just outrageous. But every now and then an old-school-looking truck comes forth without asking for too much attention. And that’s just a ruse.

So, Shawn Davis’ latest guest for the AutotpiaLA channel on YouTube came all the way from San Diego. And we’re glad the owner (and Troy, his kid with a priceless smile) did the trip. Because it gave us the chance to ogle and drop our jaws at the sight of this custom ‘62 Chevy C10. It's not the looks that matter the most, although we’re not ashamed of those either.

After all, the patina white-and-turquoise is spot on, and there are just a couple of hints towards the level of work invested into the project. Those would be the 20-inch matte black Riddler 645 wheels, as well as the truck's ability to slam itself into the ground. It’s a bagged patina truck, like many others, sure. But wait until the entire story is unraveled.

Frankly, it’s best to hear every detail from the owner itself. Because, otherwise, it’s really hard to believe that everything (well, at least some “99%” of it!) is the work of just one passionate C10 aficionado. We’ll give just some of the best hints. He loves the old C10s since he was 18 years old, and some two decades later (23 years, to be precise), he finally got the skills, how-to, and money for his dream truck.

Not a lot of bucks went into it, though. The total is around $15k, including the truck, donor vehicle, and parts! They are mostly OEM, including some knock-offs – check out the FlowMonster exhaust’s rad sound from the 7:07 mark when it’s time for the drive. But the videographer reckons there’s more than $100k in work done by the owner, DIY style, in his garage.

He’s a family man with two kids in school, so he wanted to do everything by himself because it wasn’t possible otherwise. But the truck is about as good as one that had $250k or more invested in it! And it’s almost fully custom. With a ‘74 front end, LS engine swap (cammed LQ4 6.0-liter), turquoise details (asked by the wife), a mesmerizing wooden bed, and the ability to do hugely entertaining burnouts... 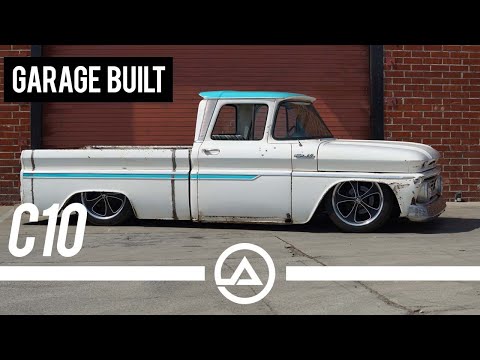