2 Opel Astra-e Plugs Into the Heart of Fantasy Land, Has the VW ID.3 in Its Sights

3 Ford Maverick Had a Dream, and It Was All About Tuning

Aurel Niculescu
Mercedes-Benz is all about posh style, comfort, and the experience of luxury. But it sometimes likes to run rampant and chase absolute performance like a proud car enthusiast.
16 photos

Sure, there are many other extremes – such as the commercial truck business or Unimogs – but here we are just going to talk about its sporty dreams. Those are usually personified by the AMG division but every now and then even that one needs a hero to relate to. Today, that chapter is well taken care of by stuff like the AMG One hypercar or the GT Black Series supercar.

And the latter has quite a tradition within the AMG stable, as Marouane Bembli, a virtual artist better known as “TheSketchMonkey” on social media, is keen to point out. The pixel master is nostalgic about the AMG Black Series, so in his latest behind-the-scenes making-of video (embedded below) he gives us a complete rundown of the exotic versions from the design standpoint.

That occupies quite a lot of space as he loves to talk about the evolution of the Black Series among different models and across time, but the most important aspect is that our CGI expert also has a favorite. And, as it turns out, it’s not the voracious GT Black/Track Series and instead, he most favors the 2008 Mercedes-Benz CLK 63 AMG Black Series of the C209 iteration (2007-2009). Quite a rare find indeed, as it’s something that seemingly blends an OEM widebody and the sporty posh demeanor of the CLK.

The modern revival case finally takes hold from the 8:44 mark and the changes are mostly subtle if not for the AMG GT Black Series-imported front end. This refreshed legend is entirely wishful thinking, luckily, as the perspective of a highly aggressive front end is a bit lacking when compared to the clean CGI sides and the absence of a rear counterweight – perhaps the virtual artist should have also imported that crazy GT Black Series rear wing, as well! 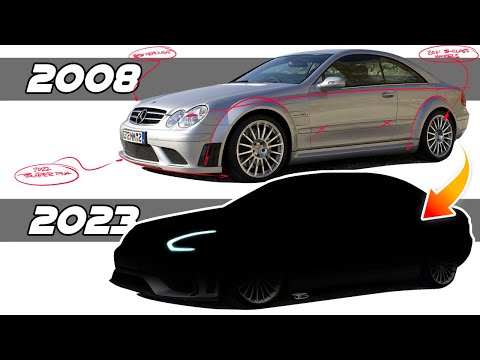