5 Chevy Silverado EV Morphs Into Electric 2024 Blazer SS, We Are Haplessly in Love
Car video reviews:
Up Next

After a rather long and awkward silence, Fisker Inc. kicked off 2022 in a big way. Naturally, it was all about their upcoming Fisker Ocean electric SUV and its mission to revolutionize the market.
21 photos

Back in January, Henrik Fisker’s re-established American electric vehicle automaker again showed the delayed Ocean fully electric SUV in Las Vegas. It did not come alone at CES, as the vehicle rocked the world’s first digital radar for a production vehicle, among other ADAS improvements via a multitude of high-tech sensors.

A bit later, Fisker’s Ocean SUV did the logical thing and crossed the Atlantic just in time for the Mobile World Congress in Barcelona and its European debut. Now, production has been rescheduled for November, ahead of the first deliveries. Hopefully, it will make the mark, this time.

But that is not all, as earlier this month Henrik Fisker showed the advanced SolarSky solar roof (also doubles as a regular sunroof) in action. However, we already know of one Fisker Ocean enthusiast that does not care a CGI moment about it. And quickly discarded the gimmick.

The virtual artist better known as SRK Designs on social media has seemingly fallen in love with EV and pickup transformations as of late. So, now he mixed them both, logically. And in the process, created the Fisker Ocean Pickup, dubbed “the most radical electric truck” out there. Probably not from the design standpoint, as one should not forget about the edgy Tesla Cybertruck.

Although, who knows, maybe there is a chance Fisker comes out first with a pickup truck, judging by the Cybertruck delays... Alas, we are not here to talk about the latter. Instead, let us witness the Fisker Ocean SUV to electric pickup truck transformation. By way of the CGI expert’s usual behind-the-scenes making-of process, of course.

Then, after watching the morphing from luxury electric SUV to fashionable zero-emission pickup truck, there is just one more question left. Did the pixel master succeed in his self-appointed “most radical” mission? 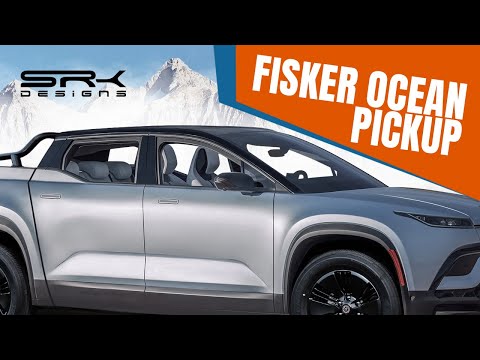