2 Audi SQ7 vs. Bentley Bentayga Diesel Acceleration: There's Not Much in It

5 Jaguar I-Pace Can Pollute More Than a Diesel BMW X5, Review Points Out
Car video reviews:
Up Next

America is the home of drag racing, but this one could only happen in Europe - a heat between the unique Tesla Model S Shooting Brake and the classic BMW 535d.
3 photos

Many E60 BMW 5 Series models are rusting away by the side of the road after many years of loyal service, so it's hard to show respect for the model. However, the 535d features the M57D30 engine, which single-handedly proved diesel sports sedans were a thing.

Nowadays, we have the Audi SQ7 and the quad-turbo M550d, but they might not have existed without the classic sequantial-turbo unit. Many European auto shops specialize in tuning more power out of this 3.0-liter workhorse while keeping it relatively economical and reliable. Of course, crowded European cities want nothing to do with it, so it's perhaps for the best that drag racing is now this 535d's lifestyle.

And up against it, we have a car we never expected to see drag racing, the Model S Shooting Brake. Finished last year by the Amsterdam-based shop RemetzCar, the sedan has been modified from the B-pillar back features aluminum panels and an added third brake light.

Unfortunately, we don't know which powertrain it has, though it could be a 90D. While the stock BMW 535d made 280 horsepower and 580 Nm of torque, this one has a lot more, as it even managed to run against a Mercedes-AMG E63 S. But the Tesla seems like a close match, even with its burdened body.

Like most diesel dragsters, the Bimmer is leaving behind a cloud of smoke. And it's not the only diesel racing out there; there's a a couple of 3 Series as well, probably with a similar engine. The smoke is said to be bad for your health, but the guys in the Tesla probably aren't too worried, what with the "Bioweapon Defense" and all. 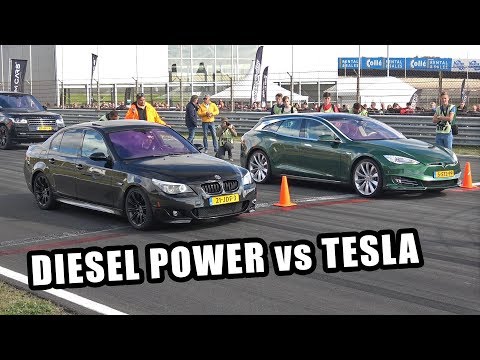