Did You Know About the Shelby Toyota 2000GT?

First Japanese supercar? You might be tempted to say it's the Honda NSX or the least known Nissan R390, but then you are wrong. The first car that introduced Japan in the supercar segment is the Toyota 2000GT. Which can also be considered the most beautiful looking and the most wanted car ever to come from the Land of The Rising Sun.
1 photo
Low, sleek and very fast for their era, there were only 351 2000GTs ever made. And while two of them got their roofs chopped so Sean Connery could fit them in the You Only Live Twice James Bond movie, one got obliterated by a fallen tree in Japan and three of them were given to racing legend Carol Shelby.

Back in the US of A, Shelby stripped two of them out of unnecessary bits, increased their engine capacity, replaced the tires, suspension and entered both of them in the SCCA (Sports Car Club if America) production car races in the CP category. The third one was kept as a spare.

Oh, forgot to say that among the three cars, on of them was wearing the MF10-100001 number chassis, which is basically the first 2000GT ever made.

The two special prepped 2000GTs competed only one season in 1968, being only outrun by a Porsche 911, which placed them on second and third places.

After the season, the spare unit was shipped back to Japan where it got build as a replica of the SCCA winner. The two racing cars remained in the US, one of them having been sold a while ago at an auction for about $1,7 million.

So next time someone says is a Shelby fan, don’t forget to test his knowledge and ask what he knows about the only Toyota model that got to be touched by the famous American automotive designer and racing driver. 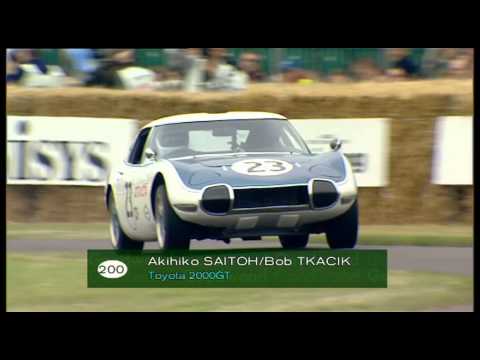